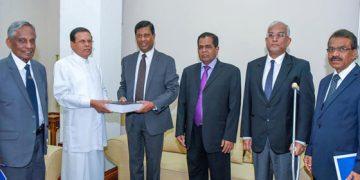 Colombo, December 30 (newsin.asia): The report on the controversial Central Bank treasury bond issue was handed over to Sri Lankan President Maithripala Sirisena by members of the Presidential Commission of Inquiry here on Saturday.

The Commission’s Chairman Justice K.T. Chitrasiri handed over the report in the presence of two other members of the Commission, Justice P S Jayawardene and retired Deputy Auditor General Velupillai Kandasamy.

President Sirisena had appointed the commission to investigate and report on the Central Bank bond issue of February  27, 2015. Sri Lankan Prime Minister Ranil Wickremesinghe made political history on November 20, when appeared before the commission which was inquiring into the LKR 10 billion bond scandal that had shaken his government and created a rift between him and President Sirisena.

Sirisena appointed the commission on January 27, 2017 after opposition lawmakers demanded an independent inquiry after two previous inquiries had proved to be fruitless.

In late February 2015, soon after Sirisena and Wickremesinghe came to power replacing the Mahinda Rajapaksa regime, the Central Bank suddenly decided to raise LKR 10 billion from a sale of 30-year government bonds with a coupon (fixed interest rate) of 12.5% , when it had initially advertised an offer of LKR 1 billion with a fixed interest rate of 9.5%.

Despite the sudden change in the terms, bonds worth LKR 7 billion were snapped up by Perpetual Treasuries Limited, a primary dealer owned by Arjun Aloysius,  who is also the son-in-law of then Central Bank Governor Arjuna Mahendran. It was suspected that Aloysius had inside information about hike and was prepared for it while others were in the dark.

Arjuna Mahendran, a Sri Lankan-Singaporean banker, had been chosen for the top banking job by Wickremesinghe. But under a cloud over the scam, Mahendran resigned and was replaced by Dr.Indrajit Coomaraswamy, said to be a nominee of President Sirisena.

Sirisena’s Sri Lanka Freedom Party (SLFP) and Wickremesinghe’s United National Party (UNP) were sharply divided on the bond issue though they were both part of the National Unity government.

Early in 2017, Sirisena felt that the SLFP would lose political credibility if it did not clear itself of the charge that it was also protecting the wrong doers. Sirisena then asked the Prime Minister (under whom the Central Bank functioned) to clear his name. Instead of making his submissions in writing Wickremesinghe decided to appear before the commission and answer all questions.

Justifying the sudden huge increase in the value of the bond issued, the Prime Minister said that Sri Lanka was heavily debt ridden due to the profligacy of the previous regime headed by Mahinda Rajapaksa and needed money to repay the loans.

The Premier revealed that a Singapore Company had made a claim the previous week for work they had done in 2013 – 2014 for the Northern Expressway development project. This debt was not included in the Appropriation Bill and the authorities were unaware of it till the foreign company asked for its money last week.

The Prime Minister made these observations when the commission sought clarifications on the debt requirement of LKR 13.5 billion as on  March 2, 2015 and the additional requirement of LKR 15 billon determined and discussed at several meetings held prior to the February 27, 2015 Treasury Bond auction.

“What had happened in the previous years was that there had been many projects approved, which were not shown in the Appropriation Bill, simply because of IMF limitations. So you got around IMF limits by not including them in the books,” the Premier explained.

The present government had to pay for two streams of payment; what was in the Appropriation Bill and others which were outside it, he said.

Further, about LKR 75 billion to LKR 100 billion had to be paid in respect of the highways alone. The government still had a liability of US$ 500 to 600 million thanks to the ad-hoc accounting of the former regime. He said that a forensic examination on this issue was being conducted into these debts.

When asked about the structure of  Perpetual Treasuries Company and the conflict of interest between the then Governor of the Central Bank Arjuna Mahendran and his son in law Arjun Aloysius, the Prime Minister said that he did not have an extensive awareness of the Perpetual Group, but added that Mahendran had assured him that there would be no conflict of interest between him and his son in law, and that he was informed that Aloysius had, in fact, stepped down from his post as Director of Perpetual Treasuries Ltd.

When Attorney General Jayantha Jayasooriya asked Wickremesinghe to clarify the steps he took to probe the treasury bond issue he pointed out that he had appointed the Gamini Pitipana Committee and then let Parliament conduct an independent inquiry into the matter without his interference.