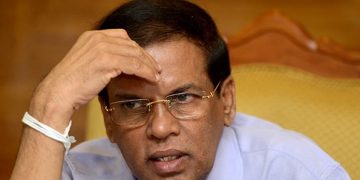 Sirisena told Wickremesinghe’s United National Party (UNP) that he re-appointed him “out of respect for democracy and parliamentary tradition”, though he was personally opposed to it.

He had earlier vowed that he will not make Wickremesinghe  Prime Minister even if all the 225 members of parliament asked him to do so.

Sirisena added that he intends to take the government forward without conflicts, as conflicts make the country go backward.

Sirisena had earlier vowed that he will not make Wickremesinghe  Prime Minister even if all the 225 members of parliament asked him to do so.

He was still of the same opinion but, as a leader who respected democracy and parliamentary traditions, he had invited Wickremesinghe to be the PM, President Sirisena said.

President Sirisena, had said there were statements made that he would be impeached, but he had taken the decisions to dissolve parliament in the best interests and believing that it should be up to the voters to decide.

“It is my opinion that the Singapore FTA should be temporarily suspended on the intervention of the government.

“It has to be revised. In amending – I do not know but by consulting more legal and economic experts whether it can be decided whether to amend or abolish it altogether.”

President Sirisena said a committee appointed by him to look into the FTA had found a major flaw in that several state agencies including in finance and ports, which should have been consulted, have not been consulted.

The committee was headed by W D Lakshman, a university don, who was had position during the Rajapaksa regime, which was generally against free trade.

The Singapore FTA has already been in operation for several months.