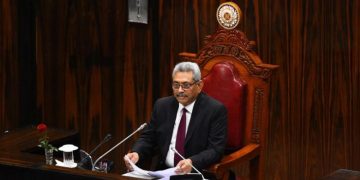 Colombo, May 1 (newsin.asia): In two different press releases on Friday, the Sri Lankan President Gotabaya Rajapaksa rejected the opposition parties’ demand that he reconvene the dissolved parliament and contested their argument that he could not draw money for government expenditure beyond April 30, without parliamentary sanction.

In response to the joint statement received by him on Tuesday, April 26, with the signatures of leaders of major opposition political parties, the President informed them that the dissolved Parliament could not be reconvened.

In the reply dated April 29, addressed to the former Opposition Leader Sajith Premadasa, the President pointed out that the joint opposition did not believe it is essential to hold elections.

The letter signed by the Secretary to President, P.B Jayasundera said: “His Excellency the President Gotabaya Rajapaksa has instructed me to inform you that going by the statement (of the Joint Opposition), it is evident that the parties who have signed the statement do not believe in holding elections and instead are engaging in a narrow political agenda at a crucial time when the government is striving to safeguard public health, social security and welfare.”

“It is observed that these parties do not appreciate the immense sacrifices by the government bodies such as Health and other Public Services, Tri-Forces, Police and the private sector to contain and eliminate the Covid-19 pandemic.”

“I have been further advised to inform you that the dissolved Parliament cannot be reconvened and the election was scheduled to be held on 25.04.2020 according to the dissolution notification issued via the Extraordinary Gazette on the 2nd of March 2020 and subsequently it was postponed to 20.06.2020 by the Election Commission.”

“In addition, His Excellency the President has instructed me to notify you that the requirement to abide by Article 70(7) of the Constitution does not arise.”

On Drawing Money From Consolidated Fund After April 30

On the opposition’s contention that the President cannot draw funds from the Consolidated Fund after the Vote on Account period expired on April 30, the President’s Secretary pointed out that “if the Appropriation Bill was not passed at the time of the dissolution of Parliament, then under Article 150(3) of the Constitution, President is empowered to meet the expenses via a Vote on Account bill for up to 03 months of convening the new Parliament.”

That is, the President can not only draw funds now, but he can until three months after the convening of the next parliament.

“This procedure has been followed in all previous instances when the Parliament was dissolved before passing the Appropriation Bill and is well within the legal frame,” the President’s Secretary said.

The opposition had not played ball when parliament was in session and when the government had sought its approval for funds, the President Secretary said in the letter.

“His Excellency the President has directed me to bring to your attention the regrettable fact that the proposal to settle arrears of Rs. 182 billion and Rs. 211 billion foreign loaned project funds incurred when you were the Finance Minister, was rejected when presented in Parliament. This was rejected despite been presented by the Prime Minister with the approval of the new Cabinet of Ministers of the Government appointed after the Presidential Elections and that of the Attorney General. Through this action, the President was prevented from fulfilling the mandate given to him by the majority of the people.”

“This is in complete contrast to the support extended by the then Opposition to the minority government of 2015.”

“Above all, His Excellency the President has directed me to communicate to you that he is perplexed as to the possible reasons for an educated, intelligent and an ardent believer in neo-liberal socio-economic model and a senior politician who had managed the economy such as yourself to desist from allowing people to exercise their democratic right through the participation in elections.”