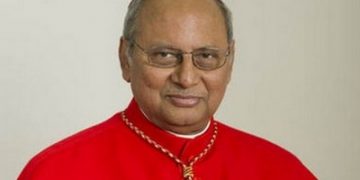 Colombo, April 30 (newsin.asia): The Sri Lankan government’s handling of the situation in the country after the April 21 serial bombings, has drawn heavy flak from various quarters in the country including the head of the Catholic church, Cardinal Malcolm Ranjith.

Cardinal Ranjith had earlier been extremely sympathetic to the beleaguered government of President Maithripala Sirisena and Prime Minister Ranil Wickremesinghe following the blasts which occurred in three churches and three posh hotels among other places killing 253 people.

He had immediately appealed to his flock not to take the law into their own hands, be calm and cooperate with the government.

But disappointed with the way the situation was developing in the past week, he told the media on Monday: “ I cannot see any measures being taken to find solutions to the issue of national security by those entrusted with the task. These politicians are once again playing their favorite blame game. As a result, the country and the people are continuing to suffer.”

Apprehensive that the blame game is related to the forthcoming elections, the Cardinal said: “At this juncture, we do not need polls.”

Presidential and nine Provincial elections are due by the end of the year and Parliamentary elections are due in the first half of 2020. In that situation,  politicians are criticizing each other, accusing others of negligence and even complicity in the planning and execution of the suicide bombings carried out by the National Taweheed Jamaat (MTJ) and the Jamathei Millathu Ibraheemi (JMI) at the behest of the Islamic State.

Call For All Party Government

The Cardinal went on to say: “In this context, I call upon all political parties in this country to form an All Party Government to resolve this issue if the need is for that.”

“I also urge the President and Prime Minister to set aside their differences and to map out policy towards ensuring that national security is not compromised in this country at any stage in the future.”

“The people are yet to be convinced that the country’ political leaders are attempting to resolve this issue by working together. They are only interested in scoring points, both personally, and for their respective political parties. We cannot see any coordination of the security measures.”

He pointed out that police are raiding places only on the basis of tip-offs by locals and not on their own intelligence. He urged a house to house search.

“If illegal weapons were found, the occupants of the houses must be taken into custody and thoroughly grilled. Some of those involved in the blasts could have fled from the country,” he added.

About the Presidential Commission appointed to probe blasts on April 22, Cardinal Ranjith said that he is “still in the dark as to whether those in the commission have even begun their deliberations, or any evidence has been sought from witnesses.”

He feared that this commission might go the way of previous Presidential Commissions which contributed little to the improvements in the country.

Opposing the appointment of retired officials to the Presidential Commission on the blasts, the Cardinal said that a body of religious leaders should be set up to oversee the work of the commission.

In a grim warning to the government, Cardinal Ranjith said: “I make it bold to say that if there is no formidable security network it will be impossible to contain the masses from rising against the government. That is because we cannot be trotting out lies to the people day in and day out and attempt to tell them to remain calm and collected.”

“If an MP or cabinet minister is behind these attacks please apprehend them and grill them. The Buddhist monks, the Maulavis and Hindu priests are all standing together to make these requests. If these requests are not fulfilled, we will be forced to step into the streets. To oppose the actions of the government we (the religious leaders) will be marching right in the front.”

“ We finally request the government to implement the law without fear or favor without leaving room for us to take the law into out our own hands,” the Cardinal added.

Endorsing Cardinal Ranjith’s statement, the Chief Prelate of the Kotte Sri Kalyani Samagri Dharma Maha Sangha Sabha, Venerable Ittapane Dhammalankara Thero said: “We cannot see those in the topmost positions of the government taking decisions jointly  as they are divided to the core politically.”

Meanwhile, the chair of the Sri Lanka Podujana Peramuna (SLPP) Prof. G.L.Peiris told the media that the present Emergency Powers and the existing Prevention of Terrorism Act (PTA) are enough to fight terrorism and there is no need for a new Counter-Terrorism Bill (CTA). After all, the Liberation Tigers of Tamil Eelam (LTTE) were defeated with such powers, Peiris recalled. He feared that the CTA would be used only against trade unions and the democratic opposition.

Udaya Gammanpila of the Pivithuru Jatika Hela Urumaya said that the Counter-Terrorism Bill, if passed, will let foreign terrorists off the hook as Sri Lanka will not be able to prosecute them without the consent of their national governments. Furthermore, the death penalty, which is there in the existing PTA, will be replaced by life imprisonment and bail will be given on payment of LKR one million.

The CEMSL has also opposed the on-going raids. In a press release, the ex-Muslims said: “Considering the prevailing situation in the country, the Council of Ex-Muslims of Sri Lanka considers that it would be an appropriate and wise step for media and security forces to avoid giving unnecessary publicity to the finding of swords, hatchets, knives and shotguns from Masjids and individual homes. “

“Giving unnecessary publicity to the findings which are not related to ISIS terrorists would create more and more hatred towards innocent Muslims among other communities as well as delay the return of normal life in the country.”

“This would also divert the attention of the security forces and the public to a different direction from which terrorists could benefit.”

“In most cases, the swords, knives, hatchets, and shotguns found in Masjids and some houses are not related to ISIS terrorists.”

“Although we have no doubt that such acts are illegal, we request those concerned to be mindful of the following facts.”

Background To Possession Of Some Weapons

The CEMSL further said that following the riots of Mawanella, Beruwela, Aluthgama, and Kandy, out of fear of the possibility of being attacked by racists, Muslims could have kept swords for defensive purposes.

Also, some individuals could have kept swords to protect themselves from thieves, other intruders and for settling personal disputes. Shotguns are often used for illegal hunting. Underworld gangs also keep their weapons in hidings.

“Though we have left Islam, we are able to understand the above as we are also from the Muslim community. Considering the present situation of the country, we request that unnecessary media publicity should not be given to findings for above-mentioned items which are not related to ISIS related activities, unless it’s clearly mentioned,” the CEMSL said.