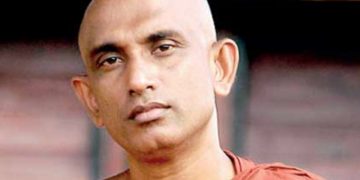 Colombo, May 12: Ven.Athuraliye Rathana Thera, Jathika Hela Urumaya leader and a National List Member of the Sri Lankan Parliament, has brought out a document on a comprehensive plan to fight the Islamic State of Iraq and Syria (ISIS) which is believed to have inspired or directed the suicide bombings in Sri Lanka on April 21.

Produced in the name of Sri Lanka National Council  (SLNC), the document was released late last week in the presence of religious leaders including Cardinal Malcolm Ranjith.

It begins by saying that it is important to realize, first and foremost, that the ISIS is not similar to the Liberation Tigers of Tamil Eelam (LTTE) and that the methods developed to fight the LTTE cannot be blindly applied to the fight against the ISIS.

The LTTE was fighting for a piece of territory where the Tamils would rule themselves, but the ISIS is a global organization aimed at converting the entire world to Islam by force of arms. It tentacles are spread across the world and it strikes in various parts of the world.

The roots of the ISIS are in global oil politics and not in Sri Lanka per se. The scope of the ISIS being global, Sri Lanka will have to join the global war against the ISIS.

While this calls for Sri Lanka’s cooperation with the West it should do so without surrendering its national independence, the document says. Intelligence should be shared with the West and other countries involved in the fight, but prudently without giving the recipient country a foothold in Sri Lanka.

The SLNC urges the government to opt for sustainable development rather than just development measured in terms of the  GDP. The latter strategy has landed Sri Lanka in debt.

There should be less dependence on imported oil and coal and more on renewable sources of energy. This will obviate the need for excessive dependence on foreign investments and foreign funding, the document says.

To secure Sri Lanka from the stranglehold of foreign countries,  ports and airports should not be handed over to foreign entities and the plan to build a corridor between Colombo and Trincomalee with foreign assistance should be abandoned.

The document cautions against going overboard in accepting international help to fight the ISIS as that would only further weaken the country and erode its independence in the long run.

This is because of electoral alliances and sharing of power with some pro-extremist parties necessitated by the proportional representation system. The SNC proposes a new electoral system which will obviate the need for such alliances with minor communal parties and enable a single party to form a stable government.

Apart from taking stringent action against persons involved in extremist activities, the government should promote national unity and moderation in civil and religious thought and action.

Towards this end, denominational schools should be replaced by multi-religious schools. Co-education should be insisted upon. Extremist and fundamental teachings should be banned. On the other hand there should a compulsory course of study in inter-religious harmony.

(The featured image at the top is that of Ven.Athuraliye Rathana Thera, MP and leader of Jathika Hela Urumaya )