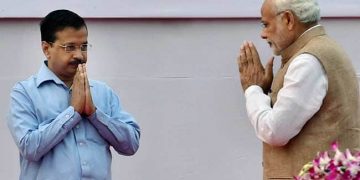 AAP has set good governance as the centrepiece of its electoral plank as well as its adminstration. If the Aam Admi Party (AAP) led by ebullient Chief Minister Arvind Kejriwal sweeps the Delhi State Assembly elections on February 11 as predicted by all opinion and exit polls, India will get a chance to establish a new norm for governance and a new way of fighting elections.

If Kejriwal’s experiment in electioneering and governance is pursued seriously and consistently in Delhi and replicated in other parts of India, governance will mean (a) delivering promised services; (b) replacing the existing lackadaisical, uncaring and arrogant approach by one based on single minded devotion and empathy for the masses; (c) replacing fancy and expensive schemes which have no relation to the masses by realistic goals of relevance to the masses; (d) replacing the notion that favorable media coverage will alone fetch votes.

Arvind Kejriwal appears to have taken a leaf out of Mahatma Gandhi book. Gandhi had given a “peoples’ yardstick” to evaluate the need for a policy or a project. The Father of the Nation suggested that when evaluating the desirability of a project one should “recall the face of the poorest and weakest man you have seen, and ask yourself if this step you contemplate is going to be of any use to him.”

If indeed Kejriwal sweeps the poll, it will be because he chose projects with an eye on the lowest of the low in society and the hard-pressed lower middle class. He made bus rides for women free. Electricity consumption up to 200 units was made free and piped water was given to many areas which did not have that. Since it came to power in 2015, his government concentrated on setting up localized basic medical clinics to serve the first and simple needs of the sick. Kejriwal improved municipal schools to the extent that a record number of products of such schools entered prestigious engineering institutes.

When criticized for lulling the people into inactivity by giving most essentials free, Kejriwal said: “Freebies, in a limited dose, are good for the economy. It makes more money available to the poor and boosts demand. However, it should be done in limits so that no extra taxes have to be imposed and it does not lead to budget deficits.”

“If I saved money by ending corruption in the last five years, and I am giving back that money to the people in the form of freebies, what is wrong in that?” Kejriwal asked and pointed out that even with all the freebies, there is no budget deficit.

He knew that electricity is a basic necessity and essential for the educational progress of the poor, but it is expensive. He knew that transport is expensive but still the poor have to travel long distances to get to their workplaces in a metropolis like Delhi. Hence free power up to a point, and also free bus rides for women.

A graduate in mechanical engineering who joined the Indian Revenue Service and became an Assistant Commissioner of Income Tax, 1968-born Kejriwal was an ardent anti-corruption and a Right to Information (RTI) crusader even while being in government service. He won the Magsaysay award for his services but had to quit the government as he was flouting its rigid rules.

He joined the then leading anti-corruption crusader, Anna Hazare, a former foot soldier in the army. But he broke away from Hazare because he felt that the fight against corruption cannot succeed without attaining political power by fighting elections through political parties.

He formed AAP in 2012 and contested the Delhi State Assembly elections in 2013. Winning 28 seats in a house of 70, political rookie formed a minority government but resigned after just 49 days in office because the House failed to pass a bill to set up an anti-corruption ombudsman.

His impetuous resignation was riled. He was slammed for functioning both as a Chief Minister and a street agitator. His actions were direct and arbitrary, although always pro-people. He had scraps with the police on the streets of Delhi. Many felt he was not cut out to be an administrator. He had even confessed that he is an anarchist.

Kejriwal complicated his political life further by contesting against the emerging Bhartiya Janata Party (BJP) icon, Narendra Modi, in Varanasi in the May 2014 parliamentary elections. Modi and the BJP were front runners in that election as people were looking for an alternative to the jaded Congress government led by a mild mannered and supposedly ineffective Prime Minister Dr.Manmohan Singh. The Congress had been in power continuously for ten years and a change was considered necessary.

Not surprisingly, Kejriwal lost to Modi by 3.37 lakh votes, though four AAP candidates won in Punjab.   Kejriwal’s bid to make AAP an all-India, secular and people-oriented alternative to the BJP and Congress, failed.

However, a pleasant surprise was in store for him in 2015, when AAP swept the Delhi State Assembly elections grabbing 67 out of the 70 seats in the House. Analysts were shocked by the result. But deeper reflection revealed that after the BJP and Modi swept the May 2014 parliamentary elections, they had become over-confident. Instead of fulfilling the development mandate they got, they brandished their  Hindutwa or Hindu majoritarian agenda, arrogantly.

The public, particularly the poor and the marginalized, who expected a people-oriented government, felt let down by the BJP regime, the charisma of Modi notwithstanding. As Sushil Aaron wrote in Hindustan Times in 2015 there was a silent urban insurgency, which was reared on cynicism about the empty spectacle of power. That silent urban insurgency found utterance by crushing the BJP and putting minnows AAP in the seat of power.

But the badly bruised BJP, which got only three out of 70 seats, started using its power in the Central government against the AAP regime in Delhi State. It made the Center’s appointee, the Lt.Governor, put spokes in Chief Minister Kejriwal’s wheel. A bitter turf war ensued as the constitutional status of Delhi was not clear. Delhi is not a full-fledged State with all powers, though it has an elected State Assembly and a cabinet of ministers.  But Kejriwal fought for full Statehood and his rights as an elected leader. Finally, in 2018, the Supreme Court clarified the powers of the Lt.Governor and the Chief Minister (CM) and said that in the normal course, the Lt.Governor should go by the advice of the CM.

While the stand-off was on, Kejriwal’s administration suffered. No wonder AAP was wiped out in the 2017 Delhi Municipal Council elections on grounds of non-performance. The BJP won the municipal elections. This was followed by an AAP rout in the May 2019 parliamentary elections which was fought on the issue of national security posed by India’s arch foe, Pakistan. Modi’s muscular counter action won him plaudits and he was rewarded with a resounding victory.

However, following the Supreme Court order on the distribution of powers in 2018, the Kejriwal government feverishly implemented its development projects, including supplying piped water to places which had no such facility. It was winning kudos from the masses.

The BJP had no answer to these achievements when it had to face the February 2020 Delhi Assembly elections. So it resorted to communal anti-Muslim and anti-Pakistan politics in a brazen manner. The BJP dubbed as “terrorists” and “agents of Pakistan” the Muslim and Hindu protesters at Shaheen Bagh against the new anti-Muslim Citizenship Amendment Act (CAA) and the potentially divisive National Register of Citizens (NRC). An all-India NRC could make millions Stateless as it almost did in Assam. One Union Minister even declared that the protesters should be shot and other party men followed suit.

But the people ignored such appeals which were dinned into their ears at hundreds of corner meetings and scores of rallies held by over 300 BJP parliamentarians including party President Amit Shah and Prime Minister Modi.

If AAP sweeps, as predicted, a refreshingly new agenda will come to the fore, and other political parties will have to take the cue and change their goals and style of functioning accordingly.