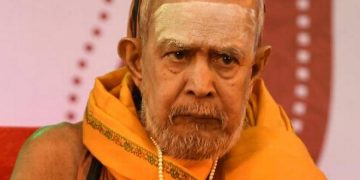 The 82-year old seer was admitted to a hospital near Kamakshi Amman temple on Wednesday due to breathing problems. The hospital and Mutt sources confirmed his demise, reports R. Sivaraman.

His health condition had reportedly deteriorated in January after which he was admitted in a hospital and later discharged. In 1954, Jayendra Saraswathi was given the title. The senior pontiff succeeded in 1994 as the 69th Shankaracharya of the Kanchi Kamakoti Peetam after Sri Chandrasekarendra Saraswathi Swamigal, hailed as Maha Periyava.

The junior pontiff, Sri Sankara Vijayendra Saraswathi will be the 70th Jagadguru of Kanchi Kamakoti Peetam.

Prime Minister Narendra Modi on Wednesday said he was “deeply anguished” by the passing away of the Seer.

In a series of Twitter posts, Mr. Modi said: “Deeply anguished by the passing away of Acharya of Sri Kanchi Kamakoti Peetam Jagadguru Pujyashri Jayendra Saraswathi Shankaracharya. He will live on in the hearts and minds of lakhs of devotees due to his exemplary service and noblest thoughts. Om Shanti to the departed soul.”

“Jagadguru Pujyashri Jayendra Saraswathi Shankaracharya was at the forefront of innumerable community service initiatives. He nurtured institutions which transformed the lives of the poor and downtrodden,” he added.