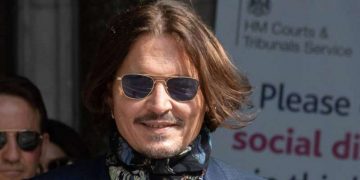 Johnny Depp will reportedly receive his full salary for Fantastic Beasts 3 despite only working one day on set before being forced to resign from the franchise. November 11 (Cover Media) – Johnny Depp will reportedly receive his full salary for Fantastic Beasts 3 despite only working one day on set before being forced to resign from the franchise.

Warner Bros. officials cut ties with the Pirates of the Caribbean star last week after he lost his libel case against bosses at The Sun newspaper over a 2018 article which labelled him a “wife beater” in relation to claims made by his ex-spouse Amber Heard.

However, according to The Hollywood Reporter, studio officials must pay the 57-year-old his full eight-figure salary for the film, even though he had reportedly only shot one scene as Gellert Grindelwald since production kicked off in September and will no longer appear in the film.

“Like many A-list stars, Depp had a so-called pay-or-play contract, which requires that he be fully compensated whether or not the film is made and even if it is recast,” the reporters write. “As is common with stars of his level, there was no morality clause in his contract, even though it was amended with each new installment.”

Depp took to Instagram on Friday to announce he was stepping down from the role, writing, “I wish to let you know that I have been asked to resign by Warner Bros. from my role as Grindelwald in Fantastic Beasts and I have respected and agreed to that request.”

He added of his legal case: “The surreal judgement of the court in the U.K. will not change my fight to tell the truth and I confirm that I plan to appeal. My resolve remains strong and I intend to prove that the allegations against me are false. My life and career will not be defined by this moment in time.”

Meanwhile, Warner Bros. officials have confirmed plans to recast Depp’s role as the dark wizard, which he portrayed in 2018’s Fantastic Beasts: The Crimes of Grindelwald. The third movie has been pushed to summer 2022.