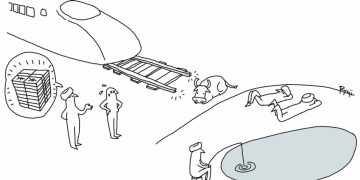 Share on WhatsApp
Tokyo, April 28 (Sentaku Magazine): The construction of a new high-speed railway line in India is scheduled to officially get underway this year, connecting the commercial capital of Mumbai and the industrial city of Ahmedabad in the western part of the country.
The project to build the line fashioned after Japan’s shinkansen system is a product of an agreement between Prime Minister Shinzo Abe and his Indian counterpart, Narendra Modi, in their December 2015 summit.

Yet anxiety is already rising due to soaring costs brought about by haphazard policies of the Indian government, leading both the Japanese government and Japanese firms to start getting bogged down.

On Sept. 14 last year, less than two years after the summit, a groundbreaking ceremony was held in Ahmedabad, attended by both Abe and Modi. The total cost of the project is set at 1.08 trillion rupees (about ¥1.8 trillion). Of that total, 880 billion rupees (about ¥1.46 trillion) earmarked for the actual construction work is to be funded by yen-denominated loans from the Japanese government with an annual interest rate of 0.1 percent and repayable in 50 years.

The terms of the loans, which a Japanese Foreign Ministry official said are “exceptionally generous,” show how infatuated Tokyo is with the project. Indeed, Modi said at the groundbreaking ceremony that Japan was providing India with funds at a near zero interest rate.

Maybe India feels that the railway line will be constructed by Japan virtually for free. An Indian official confided that the yen-denominated loans come close to a “gift” if inflation is taken into consideration.

In mid-March, meanwhile, more than 60,000 farmers took to the streets in Mumbai, which is in the state of Maharashtra, demanding full implementation of the promise made by the Maharashtra state government to forgive their debts and also seeking higher purchase prices for agricultural products.

The state government of Maharashtra gave into the farmers’ demands and promised full cancelation of all of their debts. Why was the state government so generous to the farmers even at the risk of creating a moral hazard? The answer is simple. There will be general elections next year and the Modi regime cannot afford to antagonize farmers, who account for 60 percent of the nation’s eligible voters. And the farmers know that the government cannot ignore their demands.

Noteworthy is the fact that the agreement reached between the state government and the farmers included a provision on the “Bullet Train,” which stipulates that the wishes of landowners will be fully taken into account in connection with the construction of the high-speed railway. This vaguely worded provision could lead to an unrestrained escalation of the farmers’ demands when it comes to the purchase of their land for the project.

Indeed, land acquisition for the project is progressing at an extremely slow pace. Because India is a democratic country, the government cannot forcibly take property away from its citizens as China is doing. When the high-speed railway project plan was started, earthen embankments were to be built along 322 km, or 64 percent, of the total 505 km of tracks between Mumbai and Ahmedabad.

Although elevated railroads were originally planned to cover 144 km, or 28 percent of the total, the elevated portions have been made much longer and the embankments much shorter. India made the changes on the grounds that it is too time-consuming to purchase land for embankments and that embankments will carry an inherent danger of trains colliding with people and cattle. But the real reason for the changes was that since purchase of land is not covered by the yen-denominated loans from Japan and is supposed to be carried out by the Indian side, India wanted to reduce its costs.

Ultimately about 90 percent of the entire railway line will be elevated. But this change has not been reported by the media. Strangely, the total cost of the project remains unchanged from 2015 at ¥1.8 trillion even though a railway journalist points out that changing from an embankment to an elevated railroad will more than triple the construction cost. A staff member of a Japanese trading firm stationed in India says that the change will fatten the total cost by hundreds of billions of yen. Yet no such figures have been made public.

Arbitrary changes by India are not limited to this. New Delhi has now told Tokyo that the date for starting the operation of the high-speed train services will be moved up by one year from the original target date of 2023 as agreed on at the groundbreaking event. This came as a total surprise to Japan even though local media quoted a high-ranking Indian government official as saying that the train services will start in 2022 to mark the 75th anniversary of India’s independence.

When Keiichi Ishii, the minister of land, infrastructure, transport and tourism, visited India last December, the Indian side is said to have hinted at a partial opening of the projected railway line.

Since the high-speed train project is a showpiece project for the Modi administration, India arbitrarily changes plans, unmindful of the situation faced by Japan.

Accelerating the speed of construction will naturally entail additional costs. It appears all but certain that India will ask Japan to shoulder the increased costs as a matter of course. If the aforementioned agreement with the farmers is implemented arbitrarily, there will be a chance that India will ask for changes in the railway route as well as for changes in the specifications of the railway system. The construction costs will most likely rise, and there is no chance that they will go down.

One of the reasons Japan was able to grab the contract for the Indian project despite stiff competition with other countries was the safety proven by its shinkansen system, which is said to be the “world’s best.” But a major crack found last December on a bogie frame of a shinkansen car could shake the system’s reputation for safety.

An official of the Japanese transport ministry has expressed fear that this incident might lead India to sound out other countries about manufacturing the rolling stock or demand more use of Indian products for the project.

Japan offered extraordinarily favorable loan terms to India for constructing the Mumbai-Ahmedabad railway line because it expected that Japanese companies would be able to win similar deals for speed-train railway projects covering all of the subcontinent. But the aforementioned railway journalist says that India has not made any decision on other projects and that there is a high possibility those projects will be awarded to Europe or China.

Earlier this year it was reported that a joint venture including Obayashi Corp., a major Japanese general contractor, will likely win an order to build a high-speed railway section near Ahmedabad. That means that Japan has already gone beyond the point of no return as far as the Mumbai-Ahmedabad project is concerned.

At the groundbreaking ceremony last September, Abe said both the private and public sectors of Japan will work hard together for the good of India. But Japan now faces the possibility of wastefully pouring large sums of Japanese taxpayers’ money into the project. That would be the price that the Japanese people would be paying for their government committing itself to a project without fully considering the possible consequences.

This is an abridged translation of an article from the April issue of Sentaku, a monthly magazine covering political, social and economic scenes. More English articles can be read at www.sentaku-en.com.