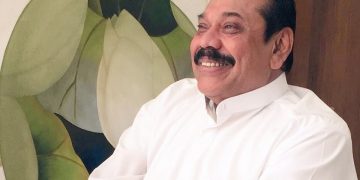 Colombo, December 2 (newsin.asia): In a strongly worded and detailed statement on Sunday, the Sri Lankan Prime Minister Mahinda Rajapaksa pointed out that “it is only in Sri Lanka that you will find political parties agitating against the holding of a general election that has already been declared.”

“In the gazette notification dated 09 November 2018 issued by the President in accordance with the provisions of our Constitution and the Parliamentary Elections Act, dates had been fixed to call for nominations from the 19th to the 26th November, to hold the poll on the 5th January 2019, and for the new Parliament to meet for the first time on the 17th January.”

“If things had gone accordingly, stability would soon have been restored to this country.”

“However when the Chairman of the Elections Commission declared that he will proceed to hold elections at least in respect of the local government institutions that were not subject to litigation, the then government reluctantly fell in line and agreed to hold elections. With that the petitioners who had gone before the Court of Appeal quietly withdrew their petitions. It was quite clear in that instance, that the court procedure was being misused for a political purpose,” Rajapaksa  asserted.

“Today, six of the nine provinces in the country do not have functioning provincial councils. The previous government avoided holding elections to the Provincial Councils for more than one year.”

“The previous government put off Provincial Council elections indefinitely by deliberately refraining from fulfilling the conditions relating to the delimitation of constituencies in Act No. 17 of 2017 which was rushed through Parliament last year just days before the Sabaragamuwa, North Central and Eastern Provincial Councils were to stand dissolved,” he recalled.

Comparing this with his regime,Rajapaksa said: “We held the Eastern Provincial Council election in 2008 even before the war had ended, immediately after clearing the province of the LTTE. Once the de-mining of the Vanni was complete, we held provincial council elections in the Northern Province as well in 2013. Today, without any war in the country, both those provinces do not have provincial councils.”

“I am placing on record this explanation because the UNP and its affiliated political parties have been making misleading statements from the political platform with a view to deceiving the general public,”  he said.

Parliaments Are Dissolved and Snap Polls Are Held

On the controversy around dissolving parliament and calling for fresh elections, Rajapaksa drew attention to the fact that from the time of Lanka’s first Parliament, elections were called early whenever necessary to overcome situations of political turbulence.

In 1959, after the assassination of S.W.R.D. Bandaranaike, W. Dahanayake became Prime Minister. When rifts emerged within his Cabinet, he too called a general election.

Provisions relating to the President’s power to dissolve Parliament in Lanka’s first Republican Constitution of 1972 were found in Article 21.

The convention of dissolving Parliament if the statement of government policy was rejected, or a budget was defeated found mention in Article 99 of that Constitution.

With regard to the second Republican Constitution of 1978, the President’s power to dissolve Parliament and the convention of dissolving Parliament in the event of a rejection of the statement of government policy or the budget, found mention in Article 70(1).

On the current controversy over what the 19 th.Amendment of 2015 says, Rajapaksa said: “The UNP and its allies claim that the 19th Amendment repealed and replaced the old Article 70(1) of the 1978 Constitution, and that according to the new article 70(1), the President cannot dissolve Parliament until the lapse of four and a half years. They claim that an early dissolution will be possible only if Parliament passes a resolution by a two thirds majority requesting the President to dissolve Parliament.”

“All the provisions relating to the dissolution of Parliament in the 1978 Constitution, were found in the old article 70(1) before the 19th Amendment. If those provisions have been abolished, then there are no provisions in the present Constitution to dissolve Parliament in the event of a government losing a vote of no confidence, the vote on the budget or the statement of government policy. Such restrictions are completely contrary to the Parliamentary tradition,” Rajapaksa said.

Power To Dissolve In Other Countries

He pointed out that in “most countries with a Parliamentary form of government have ceremonial Heads of State. Even in such countries, the Head of State can exercise his discretion in dissolving Parliament.”

“The British constitutional authority A.V. Dicey has said that if the Crown is of the view that the opinion of the public is different to that of the majority in Parliament, the Crown has the discretion to dissolve Parliament and summon a general election.”

“In 1975, the Governor General of Australia sacked Prime Minister Gough Whitlam and called a general election entirely at his own discretion.”

“That was in countries with ceremonial heads of state. However the Sri Lankan Head of State is an Executive President directly elected by the people.”

Rajapaksa recalled that it was clearly stated in the Supreme Court determination on the 19th Amendment, that the power that the sovereign people have vested in the President cannot be removed without a two thirds majority in Parliament and a referendum.

“Even though it is claimed that the President’s power to dissolve parliament that had been provided for in the old Article 70(1) have been removed, what has actually happened is that those provisions have been taken to another part of the Constitution.,“ Rajapaksa contended.

“While amending the old Article 70(1), the 19th Amendment also introduced a new subsection (2)(c) to Article 33 of the Constitution. What this new provision says is that ‘in addition to the powers, expressly assigned to the President by the Constitution or other written law, the President shall have the power…to summon, prorogue and dissolve Parliament’.”

“The new provision that has been introduced to the Constitution in the form of article 33(2)(c) has not been made subject to Article 70(1) as amended by the 19th Amendment either,” the Prime Minster said.

“Legal experts are of the opinion that the reason why the President’s powers to dissolve parliament which were provided for in the old Article 70(1) have been reintroduced to the Constitution in the form of Article 33(2)(c) is because the President’s power in that regard cannot be taken away except through a referendum.

“The 19th Amendment shifted other provisions of the Constitution from one place to another in a similar manner. The old article 42 which declared that the President was responsible to Parliament in the execution of his duties was repealed and the same provision, without any change in the wording, was reintroduced as Article 33A by the 19th Amendment. Only the drafters of the 19th Amendment will know why that was done.”

“After the 19th Amendment, Parliamentary conventions have been preserved in our Constitution through Article 33(2)(c). If we ignore that Article and accept only Article 70(1) as amended by the 19th Amendment, then we will be faced with a situation where there is absolutely no provision in the Constitution to dissolve Parliament in the event the government is defeated at a vote on the budget, the statement of government policy or a motion of no confidence is passed against a government. Such a situation is completely contrary to Parliamentary tradition.”

“If even the ceremonial heads of state in countries with parliamentary forms of government can dissolve Parliament and call for fresh elections at their discretion when the circumstances so require, how logical is it to say that the President of Sri Lanka who is vested with the executive power of the state on behalf of the sovereign people cannot dissolve Parliament no matter what happens in the country?”

“How can it be said that the President does not have the power to dissolve Parliament when Article 33(2)(c) was specifically introduced to the Constitution by the 19th Amendment?” Rajapaksa asked.

He pointed out that it took ‘only 56 votes in Parliament to pass into law Act No. 5 of 2018 which put in place a legal framework to hand over our war heroes to foreign courts. How then can one argue that you need 150 votes in Parliament to be able to pave the way for the sovereign people to exercise their franchise? he wondered.

Rajapaksa said that he was recently given a copy of a report published by an inter-governmental organization called the ‘International Institute for Democracy and Electoral Assistance’. The member states of this organization include Germany, Australia, Canada, Switzerland and also India and Japan.

“According to that report, there are only two countries that require a two thirds majority to dissolve Parliament – Kosovo and Lithuania. However, even in those countries the Head of State can dissolve parliament if a no confidence motion against the government is adopted or if the statement of government policy is rejected. The only country mentioned therein which has a Parliament that cannot be dissolved under any circumstances until the end of its term, is Norway. However the situation in Norway is very different to ours. The population of Norway is smaller than that or our Western Province. Furthermore, that country is a constitutional monarchy.”

Rajapaksa said that even if a government is defeated in the Norwegian parliament, it has to continue in office until a new government is appointed by the King. When the King in Council presents the annual budget to Parliament, it will be debated but there is no tradition of defeating budgets in that country. Most of the time, Norway has had minority governments that do not have a majority in Parliament. That is the situation at this moment as well. It should be clear that what works in Norway will not work in Sri Lanka.

The manner in which the French Constitution evolved is also relevant to this discussion. The Constitution that France had before 1940 had made it virtually impossible to dissolve Parliament. This led to chronically unstable governments being formed in France during those years.

In 1940, Hitler invaded France. After being liberated from the German occupation, France promulgated a new Constitution in 1946 which relaxed the provisions relating to the dissolution of Parliament and allowed the calling of fresh elections in the event where two no confidence motions are passed against a government within a period of 18 months.d However, because even that did not suffice to ensure stable governments, the present Constitution of France which was adopted in 1958 has given the President the power to dissolve Parliament at his discretion.

“We must learn from those experiences. Since the dissolution of Parliament and the holding of fresh elections will have implications for the person ordering such actions as well, no Head of State will take such a decision lightly. Such a decision will be made only in serious situations.”

“The only way to restore stability to a destabilized democracy will be through a general election. According to our Constitution, sovereignty is vested in the people and not in Parliament. The manner in which the people exercise their sovereignty is through the franchise. I invite all those who respect democracy to give careful thought to these matters,” Rajapaksa said.