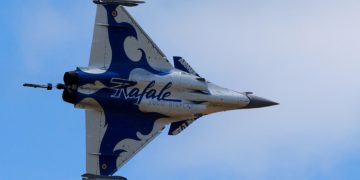 Share on WhatsApp
Moscow, March 4 (Russia Today): India is set to receive a batch of new French-made Dassault Rafale multi-purpose fighter jets this year but that may be ‘too little, too late’ to play a part in the current flare-up with its rival Pakistan, RT has been told.

The jets “should come into India’s inventory by September,” Air Chief Marshal Birender Singh Dhanoa said at a press event on Monday.

Signed in 2016, the deal with Paris-based Dassault Aviation is part of New Delhi’s program to modernize the Indian Air Force (IAF) which is currently phasing out its older aircraft.

News of the brand-new fighter jets arriving this year comes just days after Indian warplanes engaged in open air combat with Pakistan over Kashmir. The IAF lost one MiG-21 Bison in the dogfight and claimed to have shot down a Pakistani F-16 – something Islamabad denied.

The Rafale multirole fighters will enhance India’s capabilities against Pakistan but “it won’t lead to any game-changing moments due to the relatively small number” of jets ordered, Mikhail Khodarenok, a military analyst and retired colonel in Russia’s missile defense forces, told RT.

New Delhi is set to receive 36 aircraft from Dassault which is not enough to achieve supremacy in the sky, the analyst said. Furthermore, integrating the new planes into the IAF, and training pilots to fly them take time. So, “optimistically speaking, the Rafales will be fully-ready for combat only after several years,” Khodarenok explained.

As for the fighter jets themselves, they “can deploy a wide array of weapons and have advanced avionics,” the expert toldRT, adding that the jets will replace the older Dassault Mirage 2000s, used by India “mostly against ground targets.”

Along with the Dassault Mirage 2000s, the bulk of the IAF is made up of Russian-made Su-30s, along with various models of MiG fighters. Islamabad, meanwhile, has Dassault Mirage III and Mirage 5 fighters, the US-made F-16s, and the Chinese Chengdu J-7s, as well as JF-17 Thunder jets developed jointly by China and Pakistan.