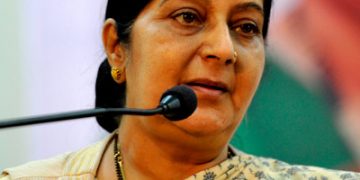 IS had killed 39 Indian workers, bodies are being brought back

IS had killed 39 Indian workers, bodies are being brought back

by Editor
in Around South Asia, Around The World, India, Top Story
Reading Time: 2 mins read
1 0 Speaking in the Rajya Sabha ,the Upper House of the Indian parliament, Swaraj said that forty Indians were originally abducted by the  terrorist organization the Islamic State from Mosul in Iraq.

One of them escaped by posing as a Muslim from Bangladesh, Swaraj said in a statement as soon as the House convened. The remaining 39 Indians were taken to Badoosh and killed.

Stating that the government waited for three years to confirm the deaths of 39 Indians in Iraq, External Affairs Minister Sushma Swaraj said on Tuesday that this was because they do not go with “believed to be killed” as confirmation.

“General [V.K.] Singh was told by a person during his trip to Badoush in Iraq about a mound. That person had said that he was witness to a mass killing in that spot,” said Swaraj, addressing a press conference in New Delhi after she made a suo motu speech in Parliament on the matter.

“We had contacted four states for DNA samples from families. After exhumation, a steel bangle worn by Sikhs and long hair worn by Sikh men was found. Last night, 38 DNA samples were matched and victims identified. One body is yet to be identified and matched with DNA,” said the Minister.

The Minister said that the Ministry never kept the families in the dark or lied to the nation. “Some family members of the 39 missing Indians asked why I informed Parliament, and not the families first. I had promised earlier to disclose this to Parliament first if the House remains in session.”

The Minister of State Gen. Singh said he will “leave for Baghdad as soon as the process of identifying is completed.”

Swaraj also blamed the Congress for disrupting proceedings in the House. “The sad news of 39 Indians saddened me. But the developments in Lok Sabha saddened me further. Today’s behaviour in Lok Sabha by Congress crossed all limits of petty politics.”

In July last year, Swaraj had told Parliament that there was no evidence to state that they were killed by the Islamic terrorists, adding that she would not commit the sin of declaring them dead.

“What ulterior motive do I have? It is easy for me to declare them dead. Unless I get concrete evidence of their being killed, I will continue to search for them. Because if a person is alive and we declare him dead, it is a sin and I will not commit this sin,” Swaraj had told the Lok Sabha.

In July 2017, Iraqi Foreign Minister Ibrahim al-Jaafari had said that there was no “substantial evidence” about whether the Indians were alive or dead and confirmed that their last known location, the prison at Badush, has been destroyed by the Islamic State.

(The picture at the top shows Indian Minister of External Affairs, Sushma Swaraj)