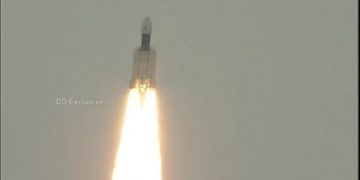 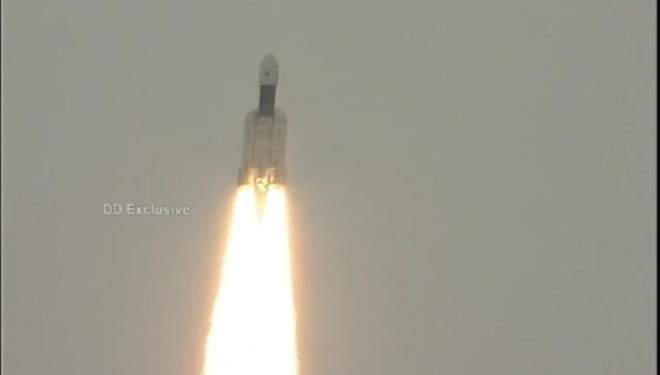 Sriharikota, July 22 (The Hindu): India’s second Lunar mission, Chandrayaan-2 lifted off as scheduled at 2.43 p.m. on Monday. The satellite was successfully placed into Earth orbit by GSLV-MkIII-M1, says ISRO.

ISRO is aiming to put the Lander (Vikram) and Rover (Pragyan) on the lunar surface on September 7. They will perform experiments for 14 days.

The previous launch suffered a jolt in the early hours of July 15 after a technical snag forced the Indian Space Research Organisation (ISRO) to call off the launch for the time being.

One of the major challenges ISRO faced when the launch was aborted was to ensure that they got the current window of September 6-7 to land on the moon.

This meant the team had to work backwards to make modifications to the mission, or as one ISRO official said do some reverse engineering. “Plus, there is always flexibility over the Earth-bound and Lunar-bound phases,” the official said.

As per the new timeline, the Earth-bound phase has increased by six days to 23 days; earlier it was 17. Under the old schedule, the Lunar Orbit Insertion (LOI) was supposed to have happened on Day 22, but now it will be on Day 30. The Lunar Bound Phase (LBN), which under the previous launch schedule was to have taken 28 days has now shrunk to just 13, between Day 30 and Day 42 after lift-off.

President of India Ram Nath Kovind congratulated the Chandrayaan-2 team. “The historic launch of Chandrayaan2 from Sriharikota is a proud moment for all Indians. Congratulations to our scientists and engineers for furthering India’s indigenous space programme. May ISRO continue to master new technologies, and continue to conquer new frontiers, he wrote on Twitter.

“Chandrayaan2 will be the first spacecraft to land close to the moon’s South Pole in some 50 days from now. The mission is expected to lead to new discoveries and enrich our knowledge systems. I wish the Chandrayaan-2 team every success,” he added.

Special moments that will be etched in the annals of our glorious history!,” PM Modi wrote on Twitter, sharing photographs of him watching Chandrayaan-2.

“Chandrayaan 2 is unique because it will explore and perform studies on the south pole region of lunar terrain which is not explored and sampled by any past mission. This mission will offer new knowledge about the Moon,” he wrote, adding that efforts like this will further encourage youngsters towards science, top quality research and innovation.

The GSLV Mark III rocket has launched the spacecraft into an Earth Parking Orbit (170 km X 40,400 km). Now the height of the orbit will be enhanced until the spacecraft can reach out to the Lunar Transfer Trajectory. On entering the moon’s sphere of influence, on-board thrusters will slow down the spacecraft, allowing it to be captured by the moon. Then it will be eased into a circular orbit (100 km X 100 km). From this orbit, the lander and rover will separate as a unit from the orbiter, and, through a series of braking mechanisms, the duo will “soft-land” on the moon, on September 7, 2019.

ISRO Chairman says that the responsibility of the mission is now with the Chandrayaan-2 team. They have to perform 15 crucial manouvres in the next one and a half months. Chandrayaan-2, a three-component spacecraft comprising an orbiter, lander and a rover, will undergo 15 crucial manoeuvres before landing on the Moon, expected by the first week of September.

As planned, two minutes after the launch, the heat shield of the rocket was separated and the cryogenic stage of the rocket ignited. ISRO scientists applauded the achievement.

The cryogenic stage has been shut down and the satellites have separated at 16.55 mins after lift-off.

The loss of a week due to the aborted launch of India’s second moon mission, Chandrayaan-2, on July 15 has not hampered the mission’s targeted landing date on the moon’s South Pole with ISRO aiming to make up for the lost time by adjusting the module’s Earth and Moon-bound phases.

ISRO is aiming to put the Lander (Vikram) and Rover (Pragyan) on the lunar surface on September 7, just one day behind the earlier schedule, to ensure that the duo get their planned full schedule of operating for nearly 14 Earth Days by tweaking the Chandrayaan-2’s timelines in space when it travels from one phase to another. ISRO Chairman K. Sivan confirmed to The Hindu that the landing will be attempted on September 7.

When Chandrayaan 1, India’s first moon mission was launched on October 22, 2008, from Sriharikota, using the Polar Satellite Launch Vehicle (PSLV), India became the fourth country to plant its flag on the lunar surface. On the moon, the mission conclusively detected traces of water along with magnesium, aluminium and silicon. Now, close to a decade later, India will launch its second lunar mission, Chandrayaan 2, again from Sriharikota, using the Geosynchronous Satellite Launch Vehicle (GSLV) Mark III rocket.

Under the old plan, the soft-landing of Vikram and Pragyan was planned to be executed on Day 54 from the lift-off date. But with a ‘technical snag’ wrecking the plans, ISRO had to improvise or risk losing precious time for the mission. As per the new timeline, the Earth-bound phase has increased by six days to 23 days; earlier it was 17. Under the old schedule, the Lunar Orbit Insertion (LOI) was supposed to have happened on Day 22, but now it will be on Day 30. The Lunar Bound Phase (LBN), which under the previous launch schedule was to have taken 28 days has now shrunk to just 13, between Day 30 and Day 42 after lift-off.

Under the Terrain Mapping Camera 2 which is on board the orbiter, the mission will produce images of the moon remotely from a 100 km lunar polar orbit. While the moon rotates about its axis, along its east-west direction, say, the lunar polar orbit will be in the perpendicular direction, along the lunar north-south direction. Thus, as the moon rotates, the orbiter gets a view of its entire surface from overhead. This data collected by the orbiter will be used to produce a 3D image of the moon’s terrain.

This is just one of the eight instruments, or payloads, on-board the orbiter. The lander carries three such payloads, some of which will measure the electron density and temperature near the lunar surface; the vertical temperature gradient, and seismicity around the landing site. The rover will carry two instruments or payloads which will collect and test samples from the moon’s surface to identify what elements they contain. The rover moves on six wheels and once let down on the moon, can travel about 500 m from the lander.

Chandrayaan 2 will have 14 Indian payloads or study devices, a mission update of the ISRO has said.

The 3,800-kg spacecraft includes an orbiter which will circle the moon at 100 km; a five-legged lander called Vikram that will descend on the moon on or around September 7; and a robotic rover, Pragyan, that will probe the lunar terrain around it.

ISRO tweeted that the filling of Dinitrogen tetroxide for the liquid core stage of GSLVMkIII-M1 was completed at 0240 hrs on July 22.