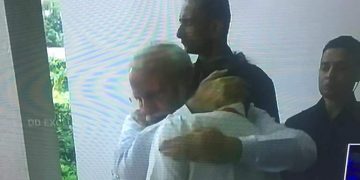 Bengaluru, September 7 (New Indian Express/Hindustan Times/newsin.asia): India’s first-ever moon-landing mission Chandrayaan-2 failed on Saturday after the lander “Vikram” lost its communication link with mission control here when it was 2.1 km away from the touch-down area on the moon’s surface.

The gloom at the mission centre here was palpable as Indian Space Research Organization chief K.Sivan announced: “The lander’s controls were normal till 2.1 km from lunar surface. We are analysing the data.”

It was after a 48-day journey, through three orbital manoeuvring components (earth orbit, trans-lunar orbit, and lunar orbit) that the Chandrayaan-2 mission reached the Moon to land at the designated location between two craters of Manzinus C and Simpelius N near the lunar south pole.

But Sivan knew that landing on the moon’s surface is a risky operation. He expected it to be “15 minutes of terror”.

Space scientists have said such mishaps can occur in first attempts. Recently an Israeli lander had  crashed on the moon. This was the first time India had tried to land an object on the moon softly and remain in touch with its activities.

Prime Minister Narendra Modi watched the action live at the Mission Operations Complex (MOX) at ISRO Telemetry, Tracking & Command Network (ISTRAC) in Peenya, Bengaluru, with about 70 students from various parts of the country who won this visit by winning a space quiz competition organised by ISRO. The mission took off after an initial hiccup when the earlier launch date of July 15 had to be deferred by a week to July 22 following the timely detection of a technical snag in one of the fuel tanks of the GSLV Mk III M1 launcher.

Action began in the lander’s automated mode from about 100 km above lunar surface when the lander Vikram proceeded towards the set location with its burners horizontal to the surface. As it descended to 30 km altitude, the thrusters on the lander broke the speed to 1.6 km per second. Vikram was designed to tilt 90 degrees to point the burners towards the ground. Upon completion of the tilt, the onboard cameras and the detectors surveyed the surface before the lander entered the hovering and landing phase using the central thrust to buffer its landing.

The six-wheeled rover Pragyaan would have left imprints of ISRO and Ashoka Chakra on the surface of the moon after rolling out of lander Vikram, which was scheduled to take place between 5.30 am and 6.30 am on Saturday. The progress of the Rs 978 crore Chadrayaan-2 mission is tracked from the Mission Operations Complex (MOX) at ISRO Telemetry, Tracking & Command Network (ISTRAC) in Peenya, Bengaluru. The 1,471-kg lander, named after the father of Indian Space programme, Dr Vikram Sarabhai, was designed to conduct experiments on the lunar surface for 1 lunar day.

From 3.8 lakh km away from the Earth, lander Vikram had the ability to directly communicate with the Indian Deep Space Network at Bylalu near Bengaluru. Chandrayaan-2’s science payloads were to expand lunar scientific knowledge through detailed study of topography, seismography, mineral identification and distribution, surface chemical composition, thermo-physical characteristics of topsoil and composition of the tenuous lunar atmosphere, leading to a new understanding of the origin and evolution of the Moon.

The payloads on the orbiter, which will continue to orbit the Moon for a year or more, will conduct remote-sensing observations from a 100 km orbit while the Lander and Rover payloads were to perform in-situ measurements near the landing site. For understanding of the Lunar composition, the Chandrayaan-2 mission plans to identify elements and mapping its distribution on the lunar surface both at global and in-situ level, besides detailed 3-dimensional mapping of the lunar regolith (layers of loose, heterogeneous superficial deposits covering solid rock).

According to ISRO, measurements on the near surface plasma environment and electron density in the lunar ionosphere were to be studied. Thermo-physical property of the lunar surface and seismic activities were also to be measured. Water molecule distribution using infrared spectroscopy, synthetic aperture radiometry and polarimetry as well as mass spectroscopy techniques were also part of the studies.

Even though the fate and the status of Vikram India’s moon lander is not known – whether it crash-landed or the communication link got cut – all is not lost as far as the Rs 978 crore Chandrayaan-2 mission is concerned, an ISRO official told IANS on Saturday.

“Only 5 per cent of the mission has been lost – Vikram the lander and Pragyan the rover – while the remaining 95 per cent – that is the Chandrayaan-2 orbiter – is orbiting the moon successfully,” an official of Indian Space Research Organisation (ISRO), who did not want to be identified told IANS.

With a mission life of one year, the Orbiter can take several pictures of the moon and send it to the ISRO.

The Orbiter can also take pictures of the lander to know its status, the space agency official said.

On September 2, the Vikram separated from the Orbiter.

On September 2, the Vikram separated from the Orbiter.

In a last-stage snag, the communication link between the moon lander and the orbiter got snapped as the former was descending towards the moon’s South Pole early on Saturday, throwing suspense over the mission’s fate.