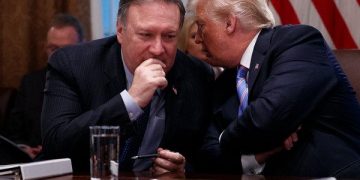 Indian regimes, both past and present, have doggedly kept up the chant that there is no room for a third party in settling any dispute between India and Pakistan in regard to Kashmir. But the claim to be keeping third parties out is not based on historical facts.

Recent developments triggered by the February 14 carnage in Pulwama, and also past events, clearly show that third parties had played a critical role in de-escalating Indo-Pak conflicts and restoring peace in the sub-continent every time there was a crisis.

There has been a major role for the US, and to some extent even China, in de-escalating landmark conflicts in the late 1990s and early 2000s, which could have led to a nuclear confrontation. Earlier, in 1966, the Soviet Union had intervened to end the 1965 war with the Tashkent Settlement. The backing of the Soviet Union had been critical in the war to break up Pakistan and create Bangladesh in 1971.

After the Indian and Pakistani airstrikes on February 26 and 27, US Secretary of State Mike Pompeo said: “I spoke to Pakistani Foreign Minister Qureshi to underscore the priority of de-escalating current tensions by avoiding military action, and the urgency of Pakistan taking meaningful action against terrorist groups operating on its soil.”

Acknowledging India’s action as “counter-terrorism” action, Pompeo said: “Following Indian counter-terrorism actions on February 26, I spoke with Indian Minister of External Affairs Sushma Swaraj to emphasize our close security partnership and shared the goal of maintaining peace and security in the region. I expressed to both the Ministers (Quresh and Swaraj) that we encourage India and Pakistan to exercise restraint and avoid escalation at any cost. I also encouraged both Ministers to prioritize direct communication and avoid any further military activity.”

On another occasion he said: “We continue to be very engaged with the issue. I spent a good deal of time on the phone last night talking to leaders in both countries, making sure there was good information exchanged, encouraging each country to not take any action that would escalate and create increased risk.”

“I had good conversations, and I am hopeful that we can take down the tension there, at least for the time being, so they can begin to have conversations that don’t portend risk of escalation to either of the two countries. So we’re working hard on that,” Pompeo added.

The middle ground taken by US helped prevent the two sides from pursuing an aggressive policy and restrict hostile activities to the now routinized firing across the Line of Control (LoC) in Kashmir.

But something dramatic had to be done to bring India and Pakistan to start talking and this was achieved when the US successfully persuaded Pakistan to release the captured Indian pilot Wing. Com. V. Abhinanandan.

A hint of the American role was given by President Donald Trump’s statement in Hanoi on February 28 in which he said: “I think reasonably attractive news from Pakistan and India, they have been going at it and we have been involved and have them stop, we have some reasonably decent news, hopefully it’s going to be coming to an end.”

Trump’s “reasonably good news” was Prime Minister Imran Khan’s announcement in parliament of the release of the captured Indian pilot. The timing of Trump’s remark showed that the decision was a product of US-Pakistan discussions.

The US had played an even more critical role during the Kargil war in 1999 which had claimed close to 1000 Indian and Pakistani lives.

Concerned over Pakistan’s international isolation on the Kargil issue, the then Pakistan Prime Minister Nawaz Sharif flew to Washington to meet President Bill Clinton. On July 4, 1999 Sharif requested US intervention to stop the fighting and resolve the Kashmir issue. But according to analyst Rahul Roy-Chaudhury, Clinton “came down heavily on Sharif”, telling him that a clear Pakistani withdrawal to the LoC was essential. He did shocked Sharif by telling him that the Pakistan army, under Gen. Pervez Musharraf, was planning a nuclear strike without his knowledge.

The shock treatment made Sharif agree to take concrete and immediate steps for the restoration of the LoC. Sharif’s decision was accepted by Indian Prime Minister A.B. Vajpayee when it was conveyed to him prior to its publicized.

“In effect, the United States facilitated a formal end to the Kargil conflict, which shortly afterwards saw the withdrawal of all Pakistani forces to its own side of the LoC without many additional Indian casualties,” Roy-Chaudhury said.

The attack on the Indian Parliament on December 13, 2001, allegedly by Jaish-e-Mohammed (JeM), again brought in US intervention. The eye ball to eye ball confrontation between the nuclear-armed Indian and Pakistani forces, threatened to shift US-Pakistan focus from the war in Afghanistan. The mobilization of a million men by both India and Pakistan led to nightmares of a nuclear war, especially after Pakistan hinted that it reserved the right to use the nuclear weapon first.

The US and its allies again felt compelled to stop India and Pakistan from going to war again. On May 28, 2002, British Foreign Secretary Jack Straw visited Islamabad, where he urged Musharraf to take action to stop cross-border terrorism in Kashmir. The next day, Straw urged India to restrain its armed forces.

Straw told India that Musharraf had promised to curb infiltration and close down terrorist camps in Pakistan-held Kashmir by the time of US Deputy Secretary of State Richard Armitage’s visit to the region in early June.

On May 31, 2002, US Secretary of State Colin Powell publicly criticized Pakistan for the ‘continuing’ infiltration across the Line of Control (LoC). The following day Musharraf told BBC that “instructions” had been given by Pakistan to cease such activity.

Within days of Armitage’s departure from the subcontinent, a thaw in India-Pakistan tensions was evident.

China has played a role in bringing peace to the Indian sub-continent post-Puwama and also in the past, although not overtly like the US. China can play a role because of its hold on Pakistan due to the building of the China-Pakistan Economic Corridor (CPEC) and its interest in investing in India.

The Spokesman of the Chinese Foreign Ministry Lu Kang told the media: “In order to alleviate recent tensions between India and Pakistan, China is in close communication with both to facilitate reconciliation and dialogue. China will continue to play a constructive role in its own way in whatever that will help ease the situation and promote regional peace and stability.”

Welcoming the Russian offer to mediate, Lu said: “Our principled position is that we encourage all constructive efforts towards easing tensions and promoting peace and stability in the region by relevant parties of the international community.”

Chinese Foreign Minister Wang Yi told the media after the Russia-India-China Trilateral in Wuzhen at the end of February: “As a mutual friend of India and Pakistan, we hope both sides will, through dialogue, find out the truth, control the situation, solve the problem and jointly well maintain regional peace and stability. The Chinese side is willing to play a constructive role in this regard.”

China had contributed to India- Pakistan conflict resolution in the past, says I-wei Jennifer Chang. During the Kargil conflict in 1999, China appealed for the restoration of the status quo ante. China joined US-led efforts to prevent a near-war scenario that brought a million troops and nuclear-tipped missiles to the border following a Pakistan-backed militant attack on the Indian Parliament in 2001. China helped the US and Russia coordinate mediation between Indian Prime Minister Atal Bihari Vajpayee and Pakistani President Pervez Musharraf. China sent Premier Zhu Rongji to India, Jennifer Chang recalls.

Similarly, Chinese officials engaged in “shuttle diplomacy” after the 2008 Mumbai terror attacks, she adds. Chinese Vice Foreign Minister He Yafei served as a special envoy shuttling between New Delhi and Islamabad to urge dialogue. China is said to have unofficially urged Pakistan to detain and prosecute some militants, which Pakistan did albeit briefly.

Asked if Russia would mediate in the dispute, Foreign Minister Lavrov said: “If they want this, then of course.” Further, Lavrov told the Pakistani Foreign Minister Qureshi that diplomatic moves could be made under the aegis of the Regional Anti-Terrorist Structure of the Shanghai Cooperation Organization (SCO).

Russia, which was very pro-India and anti-Pakistan during the Cold War, is now neutral – a necessary qualification for being a mediator.

Moscow is now cozying up to Islamabad because it wants Islamabad’s cooperation to tackle Islamic terrorism and also to bring peace in Afghanistan. Moscow is now deeply involved in the Afghanistan peace process. And it has an understanding with China in many matters through the Shanghai Cooperation Organization and the Russia-India-China Trilateral.