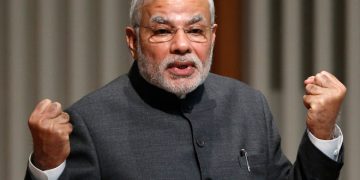 New Delhi, October 5 (NIA): India’s Prime Minister Narendra Modi has cautioned his cabinet colleagues against creating a “hysteria” over the recent surgical strikes on terror launch pads across the Line of Control (LoC) in Kashmir.

Chairing a meeting of the Cabinet Committee on Security (CCS) on Wednesday here, Modi said that only authorized people should speak on the issue of surgical strikes and that no one should speak out of turn, the Indian media reported.

His word of caution comes against the backdrop of demands that the government present proof of the cross-LoC raids to counter the smear campaign by Pakistan. But the demand has triggered a raging debate on whether proof should be provided or not.

The BJP and military experts are against disclosing details of the operation by the Special Forces.

Meanwhile, the Parliamentary Standing Committee on Defense which was to meet on October 6, 2016, for a briefing by the representatives of the Ministry of Defense on ‘Surgical Strikes across the Line of Control (LoC)’ has decided to postpone the meeting.

The panel will now meet on October 14.

Army Hands Over Video Clips Of Surgical Strikes To Government

According to the Minister of State for Home, Hansraj Ahir, the army has handed over to the government video clips of the cross-LoC  surgical strike as per laid down procedure.

Separately, Minister Kiren Rijiju said everyone should have faith in the government and the army.

“The laid down procedure has been followed. The Director General of Military Operations (DGMO) briefed about the surgical strikes. It was not the Defense Minister nor the Prime Minister and nor the Home Minister. It was the DGMO who briefed the media. That was the right thing to do and they (Army) did it,” Rijiju said.

“There was a time when written documents were submitted. Now the times have changed. Now clips are given and the clips have been given,” Ahir told reporters.

A political slugfest erupted on Tuesday over the surgical strikes with Mumbai Congress chief Sanjay Nirupam calling it a “fake”, provoking stinging criticism from the BJP. Even as his own party said it “totally dissociates” from his remarks.

As the government mulled options on the issue of release of the video footage of the surgical strikes, a debate raged with BJP leader Subramanian Swamy favoring putting out an edited version of the video on the operation while most experts spoke against it.

Rejecting the demand, the BJP attacked some Congress leaders and Aam Admi Party chief Arvind Kejriwal for raising questions over the strikes and accused them of giving a handle to Pakistan to advance its false propaganda.

The Congress, on its part, insisted that it never questioned the authenticity of the strikes but steered clear of the demand, including from within its own ranks, for the release of evidence, saying it would give appropriate advise in the best interest of national security if consulted by the government.

Swamy, a Rajya Sabha member, said anybody questioning the operation should prove prima facie evidence to support his allegation but added that a video should be released following a newspaper report today that gave details of the operation.

Jammu and Kashmir Chief Minister Mehbooba Mufti on Wednesday called on Prime Minister Narendra Modi and discussed the situation in the State with him in the wake of mounting tensions between India and Pakistan and repeated ceasefire violations by the latter along the LoC and the International Border.

This was the Chief Minister’s first meeting with the Prime Minister after the Army carried out surgical strikes across the LoC.
The Chief Minister apprised the Prime Minister of the law and order situation in the State and urged him not to escalate the conflict. She also told Modi about the steps taken by the her government to evacuate people from the border villages to safer places in view of the escalation of tensions between India and Pakistan.