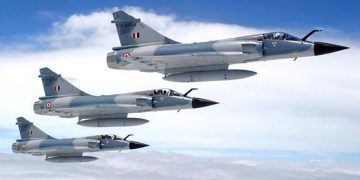 New Delhi, February 26 (NDTV): India carried out a strike on a terror camp across the Line of Control in the Pakistan-held part of Kashmir, according to reports. The strike was carried out at around 3:30 Tuesday morning,

But the Spokesman of the Inter-Services Public Relations department of Pakistan Maj.Gen.Asif Ghafoor maintained that the bombs caused no damage and that the intruders flew back on being challenged by the Pakistan Air Force.

However, sources told NDTV that the strikes were 100 per cent successful and went on exactly as planned.Top government sources said that the casualties run in hundreds, reported CNN-News18.

The reported strike come nearly two weeks after the terror attack in Pulwama in which over 40 soldiers of the Central Reserve Police Force (CRPF) laid down their lives.

On September 29, 2016, the army had carried out surgical strikes on seven terrorist launch pads across the Line of Control (LoC) in retaliation to an attack on its base in Jammu and Kashmir’s Uri earlier that month.

Soon after the Pulwama terror attack, India had appealed to the international community to back the naming of Jaish-e-Mohammed chief Masood Azhar as a “UN-designated terrorist”.

Responding to the news of a possible air strike by India, Congress chief Rahul Gandhi congratulated the pilots of the airforce. Well done, he said.

Congress leader Abhishek Singhvi said, “Balakot which is quite far out into the LOC is a deep strike and purportedly where Hafeez Saeed gives a lot of his addresses. If IAF penetrated that deep without casualties it’s a highly successful mission.”

National Conference (NC) leader Omar Abdullah tweeted saying if the news is true then the strike is not “small’ by any stretch.

He later added that the aircraft faced “timely and effective response from Pakistan Air Force” and ended up releasing “payload in haste while escaping which fell near Balakot”.

No casualties or damage occurred, the military spokesman said.

Which Balakot and Where?

Former Indian diplomat and commentator M.K.Bhadrakumar says in his  FB post: “There’s a lot of confusion going around, which will clear only when an Indian official statement / clarification becomes available… Point is, there is a Balakot in Poonch sector also, which is right on LOC. (Actually, part of that town, also known as ‘Bala Kot’, is on the Indian side of LOC!) Pak spokesman’s tweet was delightfully vague (“near Balakot”) and didn’t mention Khyber-Pakhtunkhwa, where also there is another town by name ‘Balakot’, almost adjacent to Muzaffarbad in POK! Btw, there was continuing ceasefire violation in Poonch sector of LOC near Balakot, including on Monday.”

One Pakistani military commentator has been quoted as saying that the Indian Mirages were spotted over Khyber Pakhtunkhwa province also.

The Pakistani Foreign Minister Shah Mahmood Qureshi made a telephone call to his Japanese counterpart Taro Kono on Saturday to say that it was “imperative” that he remains in Pakistan due to the “extremely grave” situation which emerged in the aftermath of the Pulwama attack.

The foreign minister told Kono that he had urged the United Nations to help stabilise the security situation in a letter to the UN secretary general. According to the FO press release, Qureshi said he had also asked Japan to play a role in the same.

(The image at the top shows IAF Mirage jets)