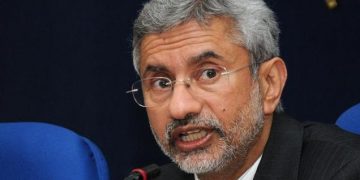 Colombo, October 23 (The New Indian Express): A top of the line Indian business delegation, comprising both public and private sector companies, headed by Foreign Secretary S.Jaishankar, had a round of meetings on Sunday with officials of Sri Lankan economic ministries to explore possibilities of collaboration and investment in a wide range of fields.

On Monday, the Indian private sector companies, which are here courtesy Confederation of Indian Industries (CII), will be holding talks with Sri Lankan private and public sector enterprises.

On arrival here on Saturday, Foreign Secretary Jaishankar had a meeting over dinner with the Sri Lankan Strategic Development and International Trade Minister Malik Samarawickrama. He called on Lankan President Maithripala Sirisena Sunday morning and met Prime  Minister Ranil Wickremesinghe  over dinner in the evening.

India has a project to build a highway network to connect places in North Sri Lanka and also North Sri Lanka with Colombo in the South and Trincomalee in the East. India is to build an LNG-fuelled 500 MW power plant at Kerawalapitiya, near Colombo. In the North, India is interested in rebuilding the Palali airport to make it an international airport to connect Jaffna with cities in Tamil Nadu and the southern states.

Two Indian private companies, including the Tatas, have been asked to lead an international consortium to  build a container terminal at Colombo port. The Indian Railway construction organization RITES is  interested in getting new projects after completing an extensive network both in North and South Sri Lanka. There has been some resistance to giving more railway projects to India after the Sirisena government came to power. But this is expected to ease due to the visit of the Indian Foreign Secretary.

India would also like to get moving in regard to the restoration and commercial exploitation of the giant oil tanks in Trincomalee. Only a fraction of the 99 tanks are now being used by the Lanka Indian Oil Compnay in collaboration with the Ceylon Petroleum Corporation. India would like the facility to be made useable not only to enhance Sri Lanka’s energy security but to make Trincomalee an energy and transportation hub.