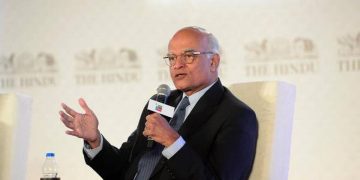 “Cumulative effect of a series of actions, including what happened in Kashmir. We seem to know we are isolated. External Affairs Minister ducked a meeting with U.S. legislators,” said Mr. Menon while addressing a public hearing here on Friday organised by the Constitutional Conduct Group and Karwan-e-Mohabbat.

Dwelling on the international consequences of the two-pronged challenges of the CAA and the NRC, Mr. Menon expressed concern about the future of the idea of India.

“Global public opinion on India has shifted if you see the international press. It’s a self-inflicted goal,” he said.

He noted with concern that even India’s friends were speaking in a dismissive manner about the internal developments in the country.

“Bangladesh Foreign Minister said ‘let them fight among themselves’. If this is how our friends feel, what must our adversaries feel,” said Mr. Menon, noting that even the Kashmir issue that was dormant at the United Nations since 1971 had been revived.