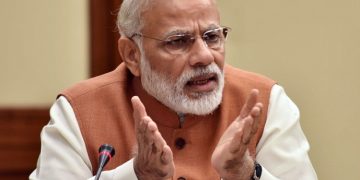 Geneva: Prime Minister Narendra Modi at a roundtable meeting with the Swiss business leaders, in Geneva on June 6, 2016. (Photo: IANS/PIB)

New Delhi, September 19 (NIA): Indian Prime Minister Narendra Modi’s assertion that the Pakistan-inspired terrorist attack on the Indian army’s administrative base at Uri in Kashmir on Sunday “will not go unpunished” has triggered considerable speculation about the options that India could exercise in the current situation.

The pros and cons of a swift, surgical strike on camps of the Jaish-e-Mohammad (JeM) terror camps in Pakistan­-occupied Kashmir (PoK) are being discussed by former Generals and the public through the mainstream and social media.

Going by these discussions, the overwhelming demand is for a surgical strike to deter Pakistan from going for such misadventures in the future. This is not surprising since India’s rising nationalistic middle class wants New Delhi to be aggressive on the world stage and it is this class which put Narendra Modi in power and it is this class he has to address and satisfy to be in power.

PTI reports that the ruling Bhatatiya Janata Party’s points man for Jammu and Kashmir, Ram Madhav, has asserted that the days of strategic restraint are over and suggested that the dictum “for one tooth, the complete jaw” should be the policy after the strike.

“We must have our military option open, if required to strike at certain places,” Lt Gen (Retd) B S Jaswal said. “The reason is that till the time it does not hurt Pakistan physically, they would not respect our decency,” Jaswal, who was GOC ­in ­C of the Northern Command, added.

“Pakistan keeps doing it (terror strikes) again and again knowing that we would not take any action,” Major (Retd) Gaurav Arya, who has expertise in the Jammu and Kashmir security situation, said.

Problems in Kashmir are “systematically manufactured” at the Pakistan army’s GHQ (General Headquarters) in Rawalpindi, he alleged, adding: “we must take immediate action. Stop trade with Pakistan, downgrade (its) Most Favored Nation (MFN) status. The world must know we are serious.”

Writing in The Hindustan Times Prashant Jha says that the Uri attack has triggered calls for India to shed strategic restraint and impose costs on Pakistan for engineering such strikes.

High-level security meetings are underway to devise a response. And there is a general air of uncertainty about what will come next in the already strained India-Pakistan ties.

The call for an aggressive response, especially on social media comes in the backdrop of a perception that India has, for too long, taken Pakistani hostilities lying down.

As the rhetoric gets shriller, it is important to answer three questions, Jha says:

1.What is this much-derided strategic restraint that India has been practicing?

2.Why has Delhi stuck to strategic restraint despite several provocations, including the 2008 Mumbai strike?

3 What has changed now?

Broadly, strategic restraint meant that while India condemned an attack, raised the issue internationally, sought to expose Pakistan’s use of terror as a state policy and stepped up internal security, it did not launch a military counter-offensive.

For one, there is no easy option to inflict costs on Pakistan. Crossing the Line of Control — even in “hot pursuit” – could mean an all out war. Given the nuclearization of the subcontinent, it is too risky because unlike India, Pakistan doesn’t adhere to the no-first use policy and has flirted with tactical nuclear weapons.

Second, the feeling was that even a surgical strike would drag India into a conflict, adversely hitting economy at home and the India story aboard.

Three, a military offensive is no guarantee of providing a solution to the crisis, which is unique.

If it was just about taking territory, Indian armed forces could well do it.

But the challenge is to force the Pakistani army to give up its policy of exporting terror. India may have the military superiority but a clean, quick victory that would force Pakistan to end the covert war is not certain. In fact, in the short term, terror strikes could well see a rise.

An Indian offensive would go on to strengthen the notorious Pakistani military-Inter Services Intelligence -Jihadi nexus, which is at the forefront of bleeding India by a thousand cuts.

An Indian response would give credence to their claim – “Hindu India” has evil designs on Pakistan and all should unite against the challenge.

So, why is there now a push for an aggressive response?

For one, India is changing. Its vast nationalist middle-class respects the armed forces, sees Pakistan as an incorrigible enemy, believes that problems in Kashmir are the creation of Islamabad, and is regularly fed a dose of patriotism by some aggressive television.

This constituency is impatient and asks — why a rising India, a powerful India, a bigger India, and an India which is on the “right side” should cave in to Pakistan. And, this is not just a city phenomenon.

In travels across largely rural Uttar Pradesh in recent months, this writer met several young people and many were unhappy with the Modi government’s Pakistan policy. “We should be more aggressive” was the chorus.

There is a second, somewhat paradoxical, reason for this impatience. India has faced a series of terror attacks over the years but the younger generation doesn’t seem to have a sense of what a war means and the suffering that comes with it.

Do remember a bulk of the country’s population is below 25. The last full-scale war that India fought was 45 years ago in 1971 against Pakistan. Many have memories of Kargil but its scale and impact was limited.

And finally, the government of the day, which in a sense represents the constituency outlined above, that believes India’s mistake has been its inability to display hard power.

The BJP championed, in the election campaign, a tough stand it would take — as BJP general secretary Ram Madhav said it in a Twitter post soon after the attack – “for one tooth, the complete jaw”.

The aggressive response to ceasefire violations along the LoC in 2014 was in keeping with that line. Top officials believe there has to be unpredictability in policy otherwise status quo would prevail and Pakistan will continue to “kick India” around. It is time not to succumb to “Pakistani blackmail”.

“Strategic restraint”, a phrase limited to defense or foreign policy experts, is suddenly part of public discourse. Going beyond it may seem desirable, there are political and social pressures pushing India towards it, but it is a difficult unchartered path where risks, so far, appear to outweigh gains, Jha warns.