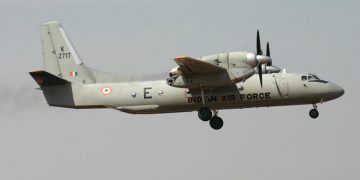 India seeks US assistance to search for missing aircraft

India seeks US assistance to search for missing aircraft July 30 (NIA)  – India, on Saturday said, that it had sought assistance from the US to check if their satellites had captured any signals from the missing AN-32 military aircraft, while noting there was very little possibility that sabotage played any role.

The aircraft, with 4 Indian officers, 17 other military personnel and eight civilians on board, went missing on July 22 after it took off from Tambaram in Chennai, in southern India. Reports said that the last time it had contact with ground control was 16 minutes later after its take off.

The Indian government announced on Friday that it was ‘disturbed’ at the aircrafts’ sudden disappearance and even experts were ‘puzzled.’

Union Defence Minister, Manohar Parrikar, said that the AN-32 aircraft had ‘adequate lifetime’ and added maximum efforts were being made to reduce accidents.

He further said that no signal from the emergency beacon locator had been tracked but added that it was ‘difficult the emergency locator would actually be activated’ if the aircraft dived inside water.

He also explained there was very little chance of a sabotage and would continue its search for the missing aircraft.

“We did not get even a single signal. We are now contacting US, to see if their satellites have picked signals,” Parrikar informed the Indian parliament.

The Indian Air Force operates more than 100 Antonov-32 aircrafts and can generally fly for up to four hours without refueling.