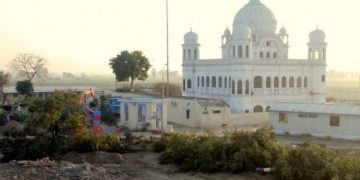 New Delhi, February 28 (Hindustan Times): India is ready for talks with Pakistan on March 14 for modalities for opening the Kartarpur Corridor to Gurdwara Darbar Sahib in Pakistani Punjab as the issue affects the sizeable Sikh community and the proposal for the talks had come from Islamabad, official sources said.

Also read: We have ‘reasonably decent’ news from India and Pak, says Trump

On Pakistan Foreign Minister Shah Mahmood Qureshi’s remarks that Prime Minister Imran Khan was ready to talk to his Indian counterpart, the sources said Khan should walk the talk and take immediate and verifiable action against terrorists as India had already shared information on the Pakistan-based terrorist group Jaish-e-Mohammad (JeM) through a dossier provided on Wednesday.

The Indian government was unclear about US President Donald Trump’s remarks about “good news” in ending India-Pakistan tensions, the sources said. The US has shown no ambiguity on India’s counter-terror actions, and India and Pakistan have a number of channels to talk and no third party mediation is needed, the sources added.