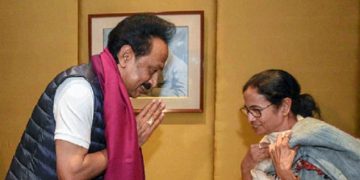 Kolkata, January 19 (The Hindu/The Statesman): The Dravida Munnetra Kazhagam (DMK) President, M.K.Stalin said here on Saturday that the upcoming general elections will be akin to the second freedom struggle for people of India to fight against the Hindutva and “radical Hinduism” of the Bharatiya Janata Party (BJP) ruling the Center.

“The next (Lok Sabha) elections will be the second fight for Independence. We will stop this poison of Hindutva and radical Hinduism from spreading. Our call is to defeat Modi and save the country,” he said at the Brigade Parade Grounds.

Criticizing the central government, Stalin also accused it of working for corporate houses.

“If Modi is back in power, the country will go back 50 years,” he said.

Conclave of Over 20 Top Leaders

Responding to West Bengal Chief Minister Mamata Banerjee’s call, a bevy of opposition leaders from across the country, including a former Prime Minister and three sitting Chief Ministers, came together in a show of political unity against the Bharatiya Janata Party (BJP) in Kolkata on 19 January.

Together, the leaders presented a show of unity – the first since a similar display during the swearing-in ceremony of HD Kumaraswamy as Karnataka Chief Minister – and unanimously expressed their desire to remove the BJP government led by Prime Minister Narendra Modi.

The so-called ‘United India’ rally, aimed at projecting both a federal front and Banerjee as a national leader, was held on a warm winter afternoon at Brigade Parade ground with lakhs of supporters in attendance.

Banerjee, who welcomed all the leaders at the venue, had given the call for the rally late last year.

Over 20 leaders from more than ten parties attended the rally. Among them was a former prime minister, and several current and former chief ministers and stalwarts from various political outfits from across the country.

Delhi Chief Minister Arvind Kejriwal said the ‘jodi’ of Modi-Shah had “done in five years what Pakistan could not do in 70 years – divide India”.

“Pakistan wanted to divide India. What Pakistan could not do in 70 years, Modi and Amit Shah did in five years. They made Muslims fight Christians, Hindus against Muslims. Their jodi will destroy India. If these two come back again in 2019 then this country will not survive,” he said in a fiery speech at the venue where tens of thousands waved TMC flags.

Equating Modi to Adolf Hitler, Kejriwal said that like the German Chancellor of the Nazi era, Modi-Shah duo want to end democracy.

“Hitler became the German chancellor in 1931. He then ended voting and remained Chancellor till his death. Modi-Amit Shah want to do the same. They want to end democracy,” he said. Urging the people to oust Modi-Shah, Kejriwal said that the objective of the gathering is not for PM’s post in 2019 but to remove the duo.

Former BJP leader and Union minister in Atal Bihari Vajpayee’s cabinet, Yashwant Sinha slammed his former party accusing it of trying to destroy every democratic institution in the country. He also rejected the notion that the anti-BJP gathering was against one man.

“Though I have left the BJP, I know what their reaction will be. They will say ‘We are here to remove one man – the man who is the PM’. I want to say that this is not the question of one man, but of a thought, an ideology against which we stand,” he said.

“We know that in the past 56 months the biggest threat has been to democracy. There is no democratic institution in this country which they have not tried to destroy,” Sinha added.

Sinha, who served as Union Finance Minister in the Vajpayee regime, said that the current BJP leadership “took sabka saath (everybody’s support) but did sabka vinash (destroyed everybody)” while raising the number of opposition accusations against the Modi government.

Former Arunachal Pradesh Chief Minister Gegong Apang, who left the BJP after a four-year association earlier this week, said that it is “testing time” for India’s democracy.

“The people in Delhi are diving the country, especially the Northeast. The Citizenship Amendment Bill is an example how a political party is dividing the country,” Apang, who was the longest-serving Chief Minister of Arunachal, said.

He added that all previous governments at the Centre believed in federal democracy but the current regime is busy dividing the country.

“I have been fortunate enough to work under Indira Gandhi, Rajiv Gandhi, PV Narsimha Rao, HD Deve Gowdaji, who is present here, Atal Bihari Vajpayee. All those people believed in federal democracy. But the last four years have been testing time for Indian democracy,” Apang said.

The Citizenship Amendment Bill was also raised by Zoram Nationalist Party leader Lalduhawma, who said that India will no longer be the place that it used to be if the Bill is enacted.

Lalduhawma, the Leader of Opposition in the Mizoram Assembly, demanded that the Bill is withdrawn or exemption given to the Northeast.

“They want to divide India, we want to unite India. Save India, save democracy,” Naidu said.

Kumaraswamy said that while the BJP speaks on eliminating corruption, it indulges in horse trading in Karnataka, referring to the ongoing political crisis in his state. “This shows BJP’s double standards,” he said.

Though Congress chief Rahul Gandhi and UPA chairperson Sonia Gandhi skipped the rally, the party deputed senior leaders Mallikarjun Kharge and Abhishek Manu Singhvi. Both Kharge and Singhvi, in their respective speeches, targeted the BJP over a host of issues ranging from the Rafale deal to communal politics.

Abhishek Manu Singhvi said that the PM makes fun of the “rainbow coalition”.

“I want to ask through you why Modi doesn’t speak of his ‘world’s most immoral government’ in Kashmir,” he said referring to the BJP’s alliance with People’s Democratic Party (PDP).

In his address, Kharge said that the time to walk together has come.

“I appeal that we all unite to save the Constitution and the democracy. They (BJP) are helping their corporate friends. They promised to provide two crore jobs every year, where are the jobs?” he said.

Kharge also read out a message from Sonia Gandhi who said, “This rally marks an important attempt to galvanize leaders across the political spectrum to fight the arrogant and divisive Modi-rule. I wish them all the success.”

On Friday, the Congress president had sent a message to Mamata Banerjee extending his support to the event hoping that the “show of unity” will send a powerful message of “a united India together” for ideas that the BJP and Prime Minister Narendra Modi were intent on destroying.

“I extend my support to Mamata Di on this show of unity and hope that we send a powerful message of a united India together,” Rahul had said in his statement.

He also clarified that the question of Prime Minister is not on the minds of the coalition partners.

“To trouble us, they (BJP) say we’ve a lot of contenders for PM’s post. We say people will decide who’ll become PM,” he said.

The BSP was represented by SC Mishra who pointed at the loss of jobs, farmer distress and minority issues, and said that such a government needs to be uprooted to save the constitution.

RJD leader Tejashwi Yadav, who arrived late at the venue, echoed the allegations levelled by Akhilesh Yadav on the ED and the CBI.

Attacking PM Modi, the former Deputy Chief Minister of Bihar said, “You may be chowkidaar (watchman), the people of the country are thanedar (inspector). If you commit a mistake, the thanedar will punish you.”

He called PM Modi “the factory, manufacturer, wholesaler and distributor of lies” and said that the unity of the Mahagathbandhan is in its diversity referring to the many parties who were at the gathering.

National Conference chief Farooq Abdullah drew attention to the volatile situation in Jammu-Kashmir. He said that every Kashmiri wants to stay with India but BJP has branded the Kashmiris as traitors.

“They are responsible for the dire situation of J-K. We have to wipe out BJP to spread harmony,” Abdullah said as his son, Omar, looked on.

Abdullah also urged the leaders at the rally to approach the Election Commission and the President of India to get the Electronic Voting Machines (EVMs) removed.

“They must remove the EVM. This is a machine that steals votes,” he said.

The senior NC leader also said that the objective of the grand alliance is to win the elections first. “Who becomes the PM is for later,” he added.

In a sharp attack on his own party, rebel BJP MP Shatrugan Sinha levelled a series of allegations against PM Modi without naming him.

“If speaking truth is rebellious, then I am a rebel,” he said.

Sinha claimed that even Finance Minister Arun Jaitley was unaware of demonetization.

“This was not a party decision else all BJP leaders, including myself, would have known about it. Hundreds of crores went away in a poof. And then the GST did the rest of the damage,” he said.

“Traders have suffered due to GST. Our priests have had to suffer. Langar, too, came under GST,” he said.

Sinha’s sharpest attack came when he raised the Rafale deal issue, which the Congress claims is a scam.

The rebel BJP leader from Bihar, in his characteristic style, said that key questions raised by the opposition on the deal must be answered else “people will say ‘Chowkidar hi Chor hai’”.

Speaking last, TMC chief Banerjee said that the situation in the country is far worse than the Emergency under the Indira Gandhi regime.

Speaking in a mix of English, Hindi and Bengali, the West Bengal CM said that Bengal has always shown the right path to the nation in times of crisis.

“Bengal has shown the path to India’s Independence. Whenever there has been a threat to the nation, Bengal has shown the path,” she said adding that the “expiry date” of the Modi regime is near. Accusing the BJP of destroying the democratic institutions in the country, Banerjee said that the Centre is also playing politics with our forces. Mocking the BJP, Banerjee said that the saffron party is leaderless.

“Everybody in this coalition is a leader, worker and organizer. No need to think of the post of Prime Minister. We will think about it. We begin our meeting from here,” she said adding that collective leadership is very important.

Banerjee said that more such meetings will be held elsewhere in the country to consolidate a powerful opposition to take on the BJP-led NDA government in 2019.

Elaborate security arrangements were in place as a sea of supporters of the political parties in attendance came from across West Bengal and beyond.

Notable opposition leaders not in attendance included Biju Janata Dal (BJD) and Telangana Rashtra Samiti (TRS). The TRS absence was particularly noteworthy due to the fact that TRS chief K Chandrashekhar Rao had himself met Banerjee last year in one of the earliest attempts at forging a federal front.

Also not present was the Left, which is one of the most vocal opponents of the current BJP regime but is also an opponent of the TMC government in West Bengal.