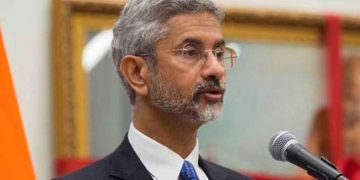 India expects to get physical jurisdiction over Pakistan-Occupied Kashmir one day: Foreign Minister

India expects to get physical jurisdiction over Pakistan-Occupied Kashmir one day: Foreign Minister New Delhi/Islamabad, September 18 (Hindustan Times/The Express Tribune): External Affairs Minster S Jaishankar has said that Pakistan Occupied Kashmir (PoK) is a part of India and it expects to have physical jurisdiction over it someday. Jaishankar also lashed out at Pakistan over its use of terrorism against India.

Addressing the media, Jaishankar said that no other country uses terror against its neighbour as foreign policy. Reiterating that Article 370 and its abrogation is an internal issue, he said that the only issue that needs to be discussed with Pakistan is terror. Jaishankar also hit out at Pakistan over the condition of minorities in the country.

Pakistan on Tuesday brushed off the statement by the Indian Foreign Minister Subrahmanyam Jaishankar in which he claimed that Azad Jammu and Kashmir (AJK) was part of India and that New Delhi would one day extend its “physical jurisdiction” there.

“We strongly condemn and reject the inflammatory and irresponsible remarks made by the Indian external affairs minister regarding Pakistan and AJK (Azad Jammu and Kashmir),” said a statement issued by the Pakistan Foreign Office late Tuesday.

“These remarks are an obvious manifestation of India’s utter frustration over the continued international censure of its egregious human rights violations in occupied Jammu and Kashmir,” the statement added.

Jaishankar’s remarks have added to the already deepening tensions between Pakistan and India over the disputed Kashmir region.

India says it expects to annex Azad Kashmir one day

Since India revoked the special status of occupied Kashmir, many Indian ministers have started laying their claims on the AJK. But this was for the first time that such a statement came from the Indian external affairs minister, raising fears in Pakistan that India might be up for something.

“Coming from an occupying state, such irresponsible and belligerent statements have the potential to further escalate tensions and seriously jeopardise peace and security in the region. Pakistan stands for peace, but would be ready to respond effectively to any act of aggression,” the statement noted.

“Instead of resorting to jingoistic rhetoric, India must rescind its illegal actions, stop forthwith grave human rights violations in IoJ&K, refrain from violating international law, and fully comply with UN Security Council resolutions for a final settlement of the Jammu and Kashmir dispute.”

Hitting back at New Delhi, the Foreign Office said India was committing “state terrorism” in the occupied valley.

“India cannot divert international attention from its crimes against the innocent people of IoJ&K by blaming Pakistan,” the statement stressed.

It said India continues to unashamedly justify the violation of Kashmiris’ human rights.

“India today is also a unique and deplorable case of a state which promotes hate crimes against minorities and consistently fails to bring to account those who indulge in cow vigilantism, mob lynchings and forced conversions and are guilty of violating India’s own laws.”

The crimes committed by the Indian state in the occupied Kashmir for over 70 years are enough to debunk pretentious claim of India being a normal state and the so-called “largest democracy,