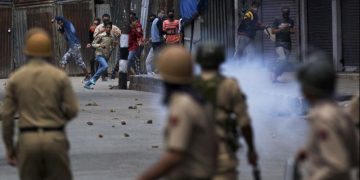 New Delhi, May 21 (The Hindu): Reacting angrily to a submission from the Geneva-based Human Rights Council (HRC) on the alleged violations in Jammu and Kashmir  by the United Nations body that it will no longer entertain any communication with the HRC’s Special Rapporteurs.

The report from the UN body came at the same time a report from two NGOs in the State on the alleged cases of torture was released in Srinagar, which was endorsed by a former UN Special Rapporteur.

The current Special Rapporteurs on Extrajudicial Executions, Torture, and Right to Health — Agnes Callamard, Dainius Puras and Nils Melzer — had referred to a June 2018 report of the Office of the High Commissioner of Human Rights (OHCHR) and written to the government in March 2019, asking about steps taken by New Delhi to address the alleged human rights violations listed in the report.

In addition, the Special Rapporteurs had listed “13 cases of concern” from 2018 alone, in which “four children were among eight civilians killed by members of the security forces.”

The report said that more than half of the 432 victims suffered some form of health complications after being tortured.

“In the 432 cases studied for this report, 24 are women. Out of these 12 had been raped by Indian armed personnel,” the report says. The torture survivors have battled with psychological issues long after their physical wounds were healed.

“Of the 432 victims, 44 suffered from some form of psychological difficulty after being subjected to torture,” it said.

A study published in 2015 by Doctors Without Borders (known by its French initials MSF) said that 19 percent of the population in the region suffered from Post-Traumatic Stress Disorder (PTSD).

Although India has been a signatory to the United Nations Convention against Torture (UNCAT) since 1997, it has not ratified the treaty to date. In all three UPRs conducted by the UNHRC in 2008, 2012 and 2017, it was recommended that India ratify the convention.

In 2010, Prevention of Torture Bill was introduced in the Indian parliament but was not passed and it lapsed in 2014.

Khurram Parvez, who is also one of the researchers for the report said that “the report is a challenge to state-imposed erasure of history and memory”.

Rejecting all the claims, the Indian Permanent Mission to the United Nations in Geneva replied to the OHCHR on April 23, saying that “India… does not intend to engage further with these mandate-holders or any other mandate-holders on the issue,” whom it accused of “individual prejudice”.

India had also rejected the OHCHR’s report on the ‘Situation of Human Rights in Kashmir’ — the first-ever such report on Jammu and Kashmir that came out in June 2018 — and accused the High Commissioner of Human Rights Zeid Ra’ad Al Hussein of “clear bias” in bringing it out.

When asked, the Ministry of External Affairs clarified that India’s stand on not engaging with the Special Rapporteurs was only for those wishing to refer to the OHCHR report.

However, UN officials say that India is already in contravention of several Conventions it has committed to, including a “Standing Invitation” signed in 2011 to all special rapporteurs to visit India. According to the UN records, more than 20 such visit requests, including to Jammu and Kashmir, are pending at present. UN sources also said that between 2016-2018, the OHCHR Special Rapporteurs had sent as many as 58 communications, and had received no response other than the April 23 letter on Jammu and Kashmir.

“The only response so far has been to the communication relating to Jammu and Kashmir….The last visit was by the Special Rapporteur on water and sanitation, in October-November 2017,” a UN communications official said in reply to queries from The Hindu.

The UN submission on Jammu and Kashmir coincided with the release of an extensive 560-page report on Monday, prepared by the J&K based Association of Parents of Disappeared Persons (APDP) and the J&K Coalition of Civil Society (JKCCS). The report, entitled ‘Torture: Indian State’s Instrument of Control in J&K’, documented 432 cases of suspected human rights violations and brutality by security forces of which only 27 had been investigated by the State Human Rights Commission.

The report claimed that nearly “70% of torture victims in Jammu and Kashmir were civilians (not militants) and 11% died during or as a result of torture”. The cases included incidents of electrocution, ‘water-boarding’ and sexual torture, which the government has repeatedly denied.

“This report will constitute a landmark. It is hoped it will be an example to other civil society organizations in India and in other countries as a model,” wrote Juan E. Mendez, former UN Special Rapporteur on Torture (2010-16), in the report’s preface, adding that he had been denied permission to visit India.

(With inputs from Peerzada Ashiq in Srinagar