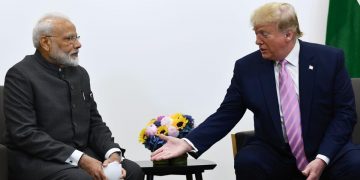 by Editor
in Around The World, India, Politics
Reading Time: 4 mins read
3 0 New Delhi, June 29 (The Pioneer): After Mexico and China, the US has launched a tariff war against India. US President Donald Trump has time and again claimed that India is a “tariff king” which imposes “tremendously high” tariffs on American products. The Trump administration has ended the preferential trade status given to India and New Delhi has termed that as being unfortunate.

Q: Recently, Pentagon released a report on Indo-Pacific strategy. It underscores building new and stronger bonds with nations that share US values across the region, from India to Samoa! Sir, at this point, US interests are clashing with India’s in oil imports from Iran, as regards the Generalised System of Preferences (GPS) status and in the matter of the purchase of S-400 air defense system from Russia. What do you think?

A: Successive US administrations have often looked to India to countervail China’s rise. More recently, given the shift in the US-China equation from military to economic prowess, and in the wake of India’s emerging as Asia’s third largest economy, and clocking an impressive growth rate, it has become critical for the US to engage India in its containment of China. The rise of India of course also makes India far more capable of pursuing its traditional stance of nonalignment that seeks it to avoid taking sides and focuses on its own national interest. Recent years have seen India exploring pragmatic partnerships with as many countries and in as many sectors as possible. This has seen India sustaining its strategic partnership with its time-tested friend Russia while also building closer strategic partnerships with the U.S. and its friends and allies. The US administration increasingly understands this. So, while the US will continue to cultivate India and even seek to apply diplomatic pressure, New Delhi has also become increasingly assertive in pursuing its strategic autonomy which has seen it purchasing Russian S-400 air defence systems and also propagating China’s engagement in the Indo-Pacific discourse to ensure that it does not become exclusivist or militarised.

A: India has finally ceased importing Iranian oil partly because of US pressures, but the US has given India an extended period to comply with its sanctions. The US has also tried to partially cover India’s deficit in its oil imports by itself supplying oil. But Iran, being the second or third largest oil supplier for India, and with India’s oil imports accounting for over eighty per cent of its annual consumption, makes it impossible for any other supplier to cover for Iran which is bound to create an oil crisis in India with serious implications for all other sectors of its  economy.

Q: United States is leveraging the prospect of using the Countering America’s Adversaries Through Sanctions Act (CAATSA) to avert India’s purchase of S-400 air defense system from Russia. How do you see it?

A: Like all other domestic laws of the US which are sought to be applied on other sovereign states and international entities, CAATSA has also been applied keeping in view US equations with the target as also its larger geopolitical implications. While the US slapped secondary sanctions on China without any delay it has not imposed any such sanctions on India. India also facilitated this manoeuvring by underplaying its S400 purchase and also arranging their delivery in a staggered manner over an extended period of time. The fact that, unlike China, India stands out as ‘major defence partner’ of the US and has placed orders for US defence systems for over US$ 14 billion over the last decade, has also been a consideration in the application of CAATSA. Credit should also be given to India’s diplomatic finesse and India’s overall relevance for the US.

Q: How do you see the US attempt to push India but not let the irritants lower the tempo of strategic ties?

A: The fact that India has emerged as the world’s six largest economy (and expected to anytime to become the fifth largest) and has also emerged as a major buyer of US defence systems, makes the US value its overall strategic partnership with India. It must manage multiple irritants and these are as follows: the tightening the noose on granting H1B visa for professional Indians; India’s reluctance to allow free transmission of data; India’s purchase of Russia’s S400 air defence systems; and India’s reluctance to join US sanctions on Iran or its trade war with China. But then it is not possible to imagine India and US having no variance in their worldview or having no irritants. But these have to be managed without much disruption of their overall bilateral relations.