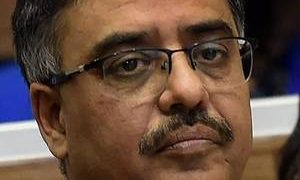 India and Pakistan fight over harassment of diplomats

India and Pakistan fight over harassment of diplomats “This is a moment for sober reflection on the state of the bilateral relationship. It is too important to be allowed to drift. There is a need to handle matters with wisdom and thoughtfulness,” High Commissioner Sohail Mahmood told The Hindu in response to a question about the latest incident in Delhi, which led to the Pakistan Foreign Ministry issuing a demarche to Indian Deputy High Commissioner J.P. Singh on Wednesday morning.

The protest came after Pakistan’s High Commission released a video taken by one of their embassy officials that appeared to show their diplomatic car being tailed by men on motorcycles while a car in front blocked their way.

The video, that could not be independently verified, shows men wearing helmets, riding the motorcycles very close to the Embassy vehicle, and also intimidating other drivers on the road in South Delhi who objected. According to Pakistani diplomats, the incident occurred on Tuesday. and was the 23rd such incident in the past two weeks.

“While heavy surveillance of diplomats has always been a cause for concern, the scale, intensity and frequency of the harassment of embassy vehicles, personnel and families in the last few weeks is very worrying,” said a diplomatic source.

The MEA did not respond to requests for a reaction to the latest allegations by Pakistan.

However, Indian officials who asked not to be named, maintained that the incidents mirror the situation in Islamabad, where matters came to a head last month.

On February 16, workers at a construction site inside the Indian High Commission were stopped and allegedly intimidated by ISI (intelligence) operatives from entering the premises, stopping the work being carried out, after which India had lodged a formal protest.

“We have noticed an increase in harassment attempts since then. We are also still awaiting investigation reports of a number of incidents (of harassment) reported to the Pakistan Foreign Office in Islamabad during the past one year,” an MEA source told The Hindu.

The incidents reported by the Indian high commission included “aggressive surveillance”, intimidation by the ISI, disconnection of power and water supplies, and a break-in at an Indian official’s home, where a laptop was stolen.

Officials said the issues between the two sides have been taken up at the “political level” as well, and High Commissioner Masood has met with Foreign Secretary Vijay Gokhale while Indian High Commissioner Ajay Bisaria met with Pakistan Foreign Secretary Tehmina Janjua to try and smooth out matters, but both sides claim there has been little improvement in the situation for diplomats in both countries.