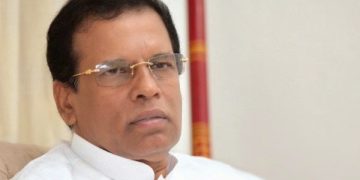 Colombo, January 15 (newsin.asia): Sri Lankan President Maithripala Sirsena’s bid to get another year in office through a Supreme Court interpretation of the relevant clauses of the 19 th. Amendment (19A) of the Constitution, has failed.

The court has told him that there is a five year constitutional cap on his term.

In a letter to Chief Justice Priyasath Dep dated January 8, Sirisena had sought the court’s opinion on whether there is a constitutional bar on his continuing in office for six hears instead of five. The President had asked for a response to be submitted to him on or before January 14.

Those against the grant of an extra year, like the Center for Policy Alternatives (CPA), told the court on January 11, that Art 30 (2) of the 19th Amendment to the Constitution, passed on May 15, 2015, had clearly stated that: “The President of the Republic shall be elected by the People and shall hold office for a term of five years.”

Further, the Amendment’s “transitional provisions” had explicitly stated that this five-year term limit applies equally to the sitting President.

“Section 49(1)(b) of the 19th Amendment to the Constitution says for the avoidance of doubt it is hereby declared that the persons holding  office  respectively,  as  the President  and  Prime  Minister,  on  the  day  preceding April 22, 2015, shall continue to hold such office after  such  date,  subject  to  the  provisions  of  the Constitution as  amended by this Act.”

Furthermore the 19th Amendment to the Constitution clearly stated which parts of the amendment would not apply to President Sirisena as the incumbent President and the reduction of the term of office was not such a provision (Section 51 of the 19th Amendment).

The CPA also pointed out that in the lead up to the enactment of the  19 th. Amendment in 2015, President Sirisena had himself noted that the reduced Presidential term of five years would apply to himself.

However, the Attorney General Jayantha Jayasuriya argued that since Sirisena was elected for a six year term by a nation-wide popular vote on January 9, 2015 prior to the enactment of the 19A, he had a popular mandate to complete the six year term.

Since the Supreme Court has not given Sirisena an extra year in office, he will have less time to fulfill various political agendas. He has serious issues  in regard to his party, the Sri Lanka Freedom Party (SLFP); his coalition partner and colleague, Prime Minister Ranil Wickremesinghe; and his immediate and most potent rival, former President and leader of the opposition Sri Lanka Podujana Peramuna (SLPP), Mahinda Rajapaksa.

He felt that he would need one more year in office to tackle these issues and reap long term political benefits. But he now finds his plans thwarted. He wanted a political  interpretation from the court, taking into account the popular mandate he got for a six year term under the constitutional provisions which existed at the time of his election in January 2015. But what he got was a classic judicial interpretation, unfavorable to him.

If he stayed in office in August 2020, Sirisena would have been able to decisively influence the selection of SLFP candidates for the August 2020 parliamentary elections.

The SLFP constitution says that if the President of Sri Lanka is an SLFP member, he or she will automatically be named Chairman of the party also, and given power to have the final say in the distribution of party tickets.

In fact, Sirisena had pre-empted Rajapaksa’s becoming Prime Minister in August 2015 when he publicly declared that he would not appoint him  Prime Minister even if his group was the single largest in parliament. The declaration, made prior to polling,  had also demoralized Rajapaksa’s supporters and led to many leaders switching sides to Sirisena, to Rajapaksa’s detriment.

An extension of his term by a year would have enabled Sirisena to pursue the corruption charges against Rajapaksa and his henchmen, demoralize the SLPP, and weaken public support for it.

At the moment, Rajapaksa and his SLPP are the greatest threat to Sirisena, and the latter is desperate to mitigate it ahead of the local bodies elections in February and the  national elections later.

And given the differences between Sirisena and Prime Minister Wickremesinghe, both in regard to policy and style of functioning, continuation in office for an extra year would have helped Sirisena further build and consolidate his power vis-à-vis Wickremesinghe and his party, the UNP and checkmated them if needed.