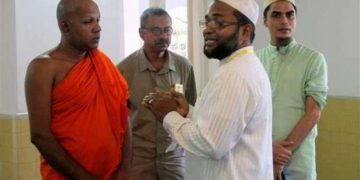 If the past is any guide, Muslims should be well integrated in Sri Lanka

If the past is any guide, Muslims should be well integrated in Sri Lanka Due to a recent tendency to “Arabize” their culture, and more particularly due to the April 21 terrorist acts by a set of Islamic radicals, pressure is being mounted on the Muslims to return to their “traditional” modes and cultural practices, which the rest of Sri Lanka feels are “Sri Lankan” and therefore “acceptable”.

The majority of Muslims, who are peace loving and accommodative, are responding positively to calls for introspection and change.

Going half way, enlightened Sri Lankans belonging to other faiths are taking steps towards a better understanding of Muslims. Sinhalese-Muslim history helps them view the Muslims in a positive light.

“The few conflicts that had occurred in the past, like the anti-Muslim riots in 1915, were instigated by the British. At the  ground level, harmony and not conflict, had been the keynote throughout history,” says Dr.K.M.Rohitha Dassanayaka of the History Department of the University of Peradeniya.

Therefore, if the long history of Muslim residence and involvement with Sri Lanka is any guide, re-integration should be natural and easy.

According to Dr.M.A.M.Shukri, the Mahavamsa, says that during the reign of Pandukabaya (437-407 BC) a certain section of Anuradhapura was set apart for Arabs traders, who were then called Yonas.

In her book ‘ Muslims of Sri Lanka Avenues to Antiquity’ Dr. Sirima Kiriyamuna says that the Sri Lankan King Agrabodhi had sent an envoy to Arabia to get information about Islam as the people of Sri Lanka had become aware of the advent of a Prophet in Arabia.

When the envoy reached Arabia, the Prophet and his first Caliph had passed away, but the second Caliph was ruling (634  to 644 A.D.). The envoy learnt about Islam from the Second Caliph. On his way back to Sri Lanka, he died in Makran which is now in Pakistan. But his Indian servant survived and returned to Sri Lanka to tell the King about Islam.

According to Dr. Shukri, the existence of Muslim settlements in Sri Lanka during 8th century AD is confirmed by the 9 th.century Arab historian Al-Baladuri in his book Futuhul Buldan.

As Arab foreign trade grew in importance in the ninth and tenth centuries, Muslims from the Arab world settled in large numbers in coastal Sri Lanka.

“Muslims were able to carry on their trade activities in a peaceful atmosphere and practiced their religion mainly due to the conciliatory attitude and the spirit of tolerance of the Sri Lankan rulers towards the Muslims and the religion of Islam,” Dr.Shukri observes.

There are significant ninth and tenth century Arabic inscriptions in Colombo, Puliyanteewu, Ellupitiya and Tirukkeswaram and Mantai, indicating Arab/Muslim habitation.

There are references to Lankan Muslims in Arab works. “Khatib Al Baghdadi in his Tarikh al Baghdad refers to a scholar by the name Abdur Raheem bin Hatim Moosa as Seilani who was in Baghdad around 877 AD,” Dr.Shukri says. The term “Seilani” indicated that the person was from Seilan, the Arabic word for Ceylon.

Muslim doctors were employed by the Dutch in their hospitals. In 1791, among the famous medical practitioners working in Dutch hospitals were Meera Lebbe Meshthriyar, Sheikh Marikkar and Sheikh Lebbe.

In the 8 th., century AD., the Hashimites, fleeing the persecution and atrocities of the Iraqi governor Hajjaj Ibnu Yusuf, settled down in the coastal areas of South India and Sri Lanka. According to Ceylon Governor James Emerson Tennant, the Hashimite migrants settled in Trincomalee, Jaffna, Mannar, Puttalam, Colombo, Galle and Beruwela.

Adam’s peak or Sri Pada in Sabaragamuwa district, has an important place in Muslim-Buddhist relations in Sri Lanka. It is sacred to both  faiths.

According to Dr. Shukri  says that in the 9 th. and 10 th., centuries, the belief that Prophet Adam descended on a mountain known as Adam’s peak in Serendib, was widely prevalent in the Muslim world. One of the earliest references to Jabal Adam or Adam’s peak, is found in Al Tabari (9 th., century).

Ibn Batuta in his Rihla states that it was a pious saint by the name Sheik Abdullah Al Khafif, who first opened up the route to Adam’s peak. Ibn Batuta who visited Sri Lanka in 1344, describes in his travels the route he took to Adam’s peak, Dr.Shukri says.

An Arabic inscription ascribed to 13thcentury was found in Bagawalane a cave about 100 feet below the summit of Adam’s peak. This inscription, which is fragmentary, bears the phrase “Muhammad may God bless him; the father of mankind (Abul Basher),” Dr.Shukri points out.

The Arabic coins of the Abbasid period unearthed in Gampola, Galagedera and Sabragamuwa areas prove the existence of Muslim settlements in the interiors of Sri Lanka in the 12th century AD.

Dr. Vasundhara Mohan in her book on the Muslims in Sri Lanka says that Muslims were present in King Parakramabahu’s (1156 – 1186 AD), Export Promotion Board called ‘Andarangathura’.

In 1270 A.D, Wijayabahu IV, the king of Dambedeniya, was murdered by his military commander Miththa. The murderer was killed by Thahoor, a Muslim commander of another military unit of the king, thus saving the government. Thahoor  was instrumental in Buvanekabahu’s becoming the King with Yapahuwa as his capital. The regime’s trade delegation to Egypt in 1284 AD was headed by a Muslim named Abu Usman.

There had been Sinhalese-Muslim marriages at the highest levels of society those days. The government text book for Islamic teachers quotes  N.J.Karunathilaka’s book ‘Wayamba Kingdom of Sri Lanka’ to say that Buvanekebahu II, who ruled from Kurunegala between 1287 -1293 A.D,  had married Madagediya Kumari, the daughter of an elite Muslim called Adinavidaana Veera Wickramasinghe from Aswathuma in Kurunegala.

The arrival of the Portuguese in 1505, spelt danger for the Muslims. The fanatically Christian Portuguese expelled Muslims from the coastal areas in 1575 A.D. In 1626 A.D, Muslims were expelled from all areas under the control of the Portuguese. But the  Kandyan King Senarath allowed 4000 of them to settle in Batticaloa between 1604 and 1635 AD and some were accommodated in Kandy itself.

According to Dr.Lorna Dewaraja, Muslims held high positions in the governments of the Sinhalese kings, such as Lekams and Muhandirams. During the reign of Keerthi Siri Rajasinghe, between 1747 – 1781 A.D, Sheik Aleem held the position of ‘Madige batdha Nileme’ or administrative head for the department of fishing and bartering. His grandson Sheikh Abdul Cader. Moula Muhandiram also held this position.

Prof.R.L.H.Gunawardana had said that Sri Lankan gems were put in the international market by Muslims. Al Biruni mentions gems from Sri Lanka in his book ‘Kithabul Jamahir fee Mahfirathil Jawaahir’ written in the 10th century A.D.

Muslims had played a political role right through. Periya Thambi Marakkar was the  right hand of King Wijeyabahu and assisted him in matters of trade and finance. Because of their international links the Muslims were sent abroad as envoys. Abu Usman was sent as an envoy to Egypt during the time of Buwanekabahu.

When the envoy of the British John Pybus arrived in the island, it was Uduman Lebbe who was designated to deal with him on behalf of the King of Kandy.

During the rule of Rajasinghe II between  1634 and 1684 A.D.,  a camel mounted Muslim division called, “Otupanthiya”, took an active part in the Wellawaya battle.