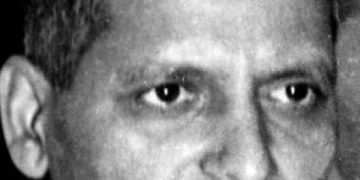 Meerut, October 4 (NIA): The first ever idol of  Nathuram Vinayak Godse – Mahatma Gandhi’s  assassin- was installed and unveiled by the members of Akhil Bharatiya Hindu Maha Sabha (ABHMS) at their Sharda Road office in Meerut on Gandhi’s birthday on October 2, The Times of India reported.

The idol, which had drawn controversy in December 2014, was finally erected as the members of the Hindu outfit.

Pandit Ashok Sharma, national Vice President of the ABHMS said, “In 2014, when we had tried to install the bust of Godse after a foundation stone laying ceremony. It was opposed by police and right-wing outfits due to which the spot was sealed and the matter was taken to court. This time, we exercised extreme caution and unveiled the statue on Gandhi Jayanti – as there can be a no better day. Our step signifies that it is time all Indians stop following Gandhi’s footsteps and start worshipping Godse.”

The two-feet high and two-feet wide stone statue of Godse, made by artisans in Jaipur, weighs 50 Kg. It was brought to Meerut office by Yogendra Verma, Akhil Bharatiya Hindu Mahasabha’s UP unit President. A shawl and a garland were presented to Godse’s bust by the members after it was unveiled.

“The bust cost me Rs 45,000 and was brought from Jaipur to Meerut. I have put in all the money because I don’t see a point taking money from others for such a good cause,” said Verma.

The members of the Hindu outfit also referred to the surgical strikes of Indian Army post-Uri attacks and said that the strikes are itself a signal of the Indian government that they want to get rid of Gandhi’s principles.

Do we follow Gandhian principles these days? The recent surgical strikes done by the Indian Army gives my answer. All of us follow Godse’s principles, but still praise and worship Gandhi. Had we been following Gandhi’s footsteps, surgical strikes would not have happened. I offer my condolences to the families of the soldiers who died in Uri attacks and pray that Indian Army keeps giving befitting replies to Pakistan just like they recently did,” said Sharma.

The Hindu outfit leaders claimed to have observed the day as ‘Dhikkar Divas’ wherein they shunned the principles of Gandhi and conducted a yagna in this regard. They celebrated January 30, the day Gandhi was killed, as ‘Ananya Divas’ and distributed sweets.

Statues To Be Installed In Temples

At present the outfit is quite determined but tight upped about how it plans to install statue of Nathuram Godse on January 30, the day Godse shot dead Mahatma Gandhi ,The Hindu reports.

The Hindutva outfit has decided not to publicise its programmes of the installation of the statue after it felt “too much media coverage” became an “obstacle” in its work.

After its public announcement to build a temple for Godse in Sitapur district and install a Godse statue at an identified place in Meerut, the Uttar Pradesh police sealed the two places. While treating the issue as serious problem for law and order the State police also plans to invoke section 144 of the IPC at the two places.

As per the revised strategy, the outfit will first install Godse statue across the country and will then inform the media in order to avoid possible crackdowns by the Uttar Pradesh government and possible roadblocks posed by the other State government in the country. UP because

According to senior functionaries of the Hindutva group, they met several group of saints during the recently concluded “Magh Kumbh mela” in Allahabad.

“After we announced about our plans the government sealed the place. We don’t want unnecessary attention. We would rather focus on competing the job at hand,” he told this correspondent.

According to a senior Hindu Mahasabha leader who didn’t want to be quoted because of the sensitivity of the issue, Godse statue might soon be seen within temple premises across the country — to start with, in temples in the Hindi speaking States like Madhya Pradesh, Uttar Pradesh, Rajasthan and Bihar.

“We met hundreds of saints during the Magh Kumbh Mela in Allahabad who assured us of their support and now we are planning to install statues in temples with the support of these saints,” said the outfit leader.

“We have a dedicated set of youths who are brimming with nationalistic fervour and who are ready to put Godse statue at the Raj Ghat at the cost of getting arrested but we don’t want to work like that. We just want to spread the message of ‘Akhand bharat’ (unified India) which was the main mission for Nathuram Godse ji,” added another.

He clarified that the statues won’t necessarily be in the main part of the temples so as not to equate Godse with the Hindu Gods.

“After some serious thinking and discussion with saints, we decided that as mark of respect to Godse we can install his statues somewhere in the premises of temples. We do have statues of great Hindu reformers and great men in temple premises,” maintained the Hindutva leader.

While justifying the proposed move, the Hindu Mahasabha leader said: “Godse was no less than any other greater because he sent across the message of unified India and protested against the division the country by Klimt Gandhi”.

The Hindutva group has ordered about five hundred statues from artists in Jaipur. It also plans to inaugurate and launch small libraries which would provide literature highlighting Godse’s “point of view about unified India and correct sequence of events as far as Gandhi’s killing is concerned”.

The public announcement by the outfit to install a Godse statue and subsequent well reported bhumi pujan in Meerut for the statue, had resulted in its leaders being booked under various sections of the IPC.