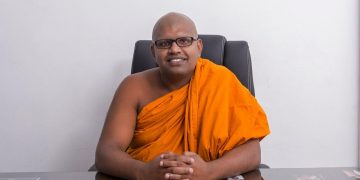 Kandy (Sri Lanka), March 11 (Dawn): In the Kumbukandura village adjoining Digana, Kandy, the Masjidul Akbar Jumma Mosque is a hive of activity. The date is March 9 and time 10.30 am. Military and police personnel dot the premises. Inside the vast building, a sense of trepidation prevails. Friday prayers will soon be called and the mosque personnel fear attacks by Sinhala extremists.

The anti-Muslim violence that began on March 5 in Digana, leaving Muslim shops in the town torched, has shocked the hitherto peaceful area.

“The Sinhala truck driver M.G. Kumarasinghe, attacked by four Muslim men on the night of Feb 22, was a resident of Ambala in Medamahanuwara, over 13 kilometres from Digana. He was a good man. We were deeply saddened that he died in hospital [on March 3],” says Afauldeen Khairulla, President of the Kumbukadura mosque.

“Kumarasinghe was known for his close friendship with Muslims. He used to give lifts to Muslim schoolchildren. It was unfortunate that the attackers happened to be Muslims,” says Khairulla.

He echoes the military and police statements that the events were orchestrated by outside elements who had incited the local people. A bakery, textile shop, phone shop and farm-products shop were among the scores of businesses destroyed in Digana.

“The value of the loss of each of these business establishments is at least 80 million Sri Lankan rupees each (US$ 514,000). Overall, in the pockets attacked in Kandy, mainly Digana, at least 200 shops were destroyed. Many Muslim businessmen in Digana live in nearby villages such as Kumukkandura and Hijirapura”, says S.H.M. Irshad, committee member of the Kumbukadura Civil Society.

“Most of my suppliers are Sinhala,” says A.H.M. Fauz of Kumbukandura, whose farm shop in Digana was totally destroyed.

“We should strive to create something good out of this terrible situation. All of us are now planning to form multi-ethnic committees in business societies in the area and even more regularly interact with chief monks in temples of our villages,” adds Mohammed H. A Sameeu, a former school principal.

According to him, many stories are emerging of Buddhist monks in several temples working to prevent the incidents of the week becoming widespread and engulfing the whole of Kandy district.

“The Ven. Halpotha Dhamajothi Nahimi, the Chief Monk of the Buddhist Centre in Balagolla between Digana and Tennekumbura, personally came to this mosque to be with us and offer protection while our prayers were under way,” says Sameeu.

As he speaks a team of military officials walk in.

“Keep your minds at ease and pray,” the senior official tells the worried clerics. “I will resign from the army, I will not wear this uniform again, if even a pebble is cast on this mosque,” he adds. Soon after, the call for prayer is heard.

Over 25 kms away in Kandy town, in the scenic hamlet of Muruthalawa a dozen mosques, Buddhist temples, and Sinhala-and Muslim-owned shops co-exist. No sign of violence is evident but one notices giant banners. These are public “Thank yous” that the Muslims of these village and bordering villages have put up, in gratitude to the Sinhalese, for standing up to mobs who arrived from outside Kandy on the fifth night.

“The Buddhists of these villages avoided such bad karma. If Muruthalawa was attacked by these mobs, other adjoining villages, Dehiyanga, Dehigama, Yahalatenne and Godamuduna, would have also suffered,” says Athula, who owns a row of shops in Muruthalawa.

Therefore, a small incident in one of these villages would have led to a chain reaction  given the volatile situation. But these villages epitomized traditional harmony, oblivious to what was happening in the other parts of the district, despite horrifying threats of outside mobs trying to create a stir.

The architect of this miracle of peace is the 31-year-old chief monk and founder of the Nelligala International Buddhist Meditation Centre in Muruthalawa, Ven. Wathurukumbure Dharmarathane.

“When I heard around 500 people had come in an organized manner to the borders of our village and were planning to involve our youth in anti-Muslim attacks, I gathered young men with leadership qualities and obtained the support of neighboring monks,” he says.

“We carried out surveillance for over 48 hours, day and night, preventing troublemakers from entering the villages. I called a meeting with the Muslims of these villages. I vouched for their safety on the understanding that they would ensure the prevention of Muslim extremism. I wanted no rumors, nothing that would set communal fires burning,” he recalled.

The monk contacted every ‘top person’ that needed to be contacted, including the Army Commander, to ensure violence did not occur.

The story is concluded by A.L.M. Zarook, owner of a prominent tea factory in the vicinity and a regular patron of the Buddhist centre. He has known the monk for a long time.

“He is truly venerable and I wish young monks like him would rise to the helm of the Buddhist hierarchy to provide a dynamic and peaceful leadership,” Zarook says.

As gusts of strong wind blow through the centre, with its wide expanse of space and beautifully carved Buddha statues overlooking distant hills, more Muslim villagers are seen entering the premises to thank Ven. Dharmarathane. As the writer departs she over hears words of kindness and peace.

(The featured image at the top is that of Ven. Wathurukumbure Dharmarathane, founder and head of the Nelligala International Buddhist centre in Muruthalawa who prevented attacks on around 5 Muslim majority villages in the area)