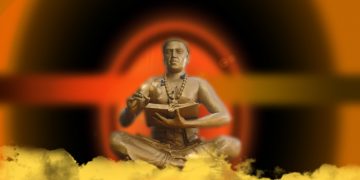 How Jaffna Hindus met the challenge of European missionaries

How Jaffna Hindus met the challenge of European missionaries With the advent of European power in Ceylon in the 16 th.Century, the Hindus of Jaffna began to face religious annihilation. The Portuguese and the Dutch were hell bent on converting them to Christianity – the Portuguese to Roman Catholicism and the Dutch to Protestatism. The British, with the help of American missionaries also tried, but in a different way, with education and job offers, not crude coercion.

However, by the middle of the 19 th.Century, there was a Hindu revival which was spearheaded by a Hindu, Arumuga Navalar. Educated in  a Christian missionary school, Navalar  was well-versed in Christianity. He could therefore counter the Christian missionaries and restore Hinduism or Saivism to be precise, to its rightful place among the Tamils of Jaffna.

The impact of British rule, which began in erstwhile Ceylon at the fag end of the 18 th.Century, was paradoxical. One the one hand, the era of forcible conversion which marked Portuguese and Dutch rule was over. By 1814, under British rule, 329 Hindu temples or kovils were built in place of the 500 the Portuguese had destroyed. Brahmin priests who had been chased out by the Dutch, re-appeared. In the liberal atmosphere created by the British, most converts reverted to their traditional religion, namely, Hinduism.

Daniel Poor, a pioneer of the American Ceylon Mission (ACM) noted that with the Dutch yoke off their shoulders, the Hindus of Jaffna returned to “sweet idolatory”. Temple building was resumed at a frenetic pace.

But as Dr Murugar Gunasingam points out in his book: Sri Lankan Tamil Nationalism: A Study of its Origins (MV Publications, Sydney 1999), British rule did not turn out to be an unmixed blessing. It had created the danger of conversion through education and systematic propaganda through the use of the new print medium.

The new political and economic order established by the British was creating employment opportunities for the Hindus of Jaffna, opportunities which necessitated modern education in the English. The Hindu Tamil youth of Jaffna were eager to seize these opportunities and acquire an English education.

Seeing a potential in this for gaining converts, the new Protestant missions set up schools and boarding houses for students, including some for girls. Printing presses were established to churn out easily accessible Christian literature on a large scale.

The new British rulers handed over government-run schools to the missionaries, and gave grants-in-aid to non-government schools. The latter was a great help to missionary-run schools.

The missionary-run schools and medical missions, with their dedicated and selfless staff, presented a very new, indeed, a beguiling face to the people of Jaffna.  Under Portuguese and Dutch rule earlier, they had been dragooned into accepting Christianity and were economically exploited.

However, despite possessing all the necessary tools for mass conversion, the Protestant missionaries did not make much headway. According to Dr Gunasingam, determined evangelization by the American Ceylon Mission (ACM) from 1816 to 1839 had yielded only 492 converts. Success eluded the Wesleyan Mission and the Church Missionary Society (CMS) also.

Conversion was low because, unlike the Portuguese or the Dutch, the British did not make conversion a necessity for obtaining government jobs or state patronage. The British had also declared that they would not allow forcible conversions, Gunasingham says.

However, many Jaffna Hindu Tamils, mainly the upper caste Vellalas, Chettiars and Brahmins, felt that the power of the missionaries was insidious. They feared that if the Hindus, mainly Saivite, were not careful, they could be overwhelmed by the missionaries armed with all the tools of modern propaganda then available. The education system was their monopoly .So was the printed word.

On the flip side, the liberal education which the mission schools provided, had created awareness among the Saivites and sharpened their critical faculties. While the missionaries hoped that education would make young Saivites see the truth of Christianity and the falsehoods of Saivism, it had the opposite impact. Often, an English education made the student critical of Christianity and see the danger that it posed to his own indigenous religion, Gunasingham points out.

But what triggered active resistance was the stepping up of vile anti-Saivite propaganda by the missionaries. According to Gunasingam, the missionaries started attacking Saivisim and Saivite practices viciously because they were frustrated with the poor rate of conversion.

In his article entitled Arumuga Navalar and the Hindu Renaissance Among the Tamils in the book “Religious Controversy in British India” edited by Kenneth W Jones, D Dennis Hudson gives examples of the missionaries’ low view of Saivism. Derogatory remarks about Saivism and the Nallur Kandaswamy  kovil used to appear frequently in the Protestant periodical Morning Star.

The first to protest against such characterizations and write against Christianity was Muthukumara Kavirajar (1780-1851). His works, which were printed later, became an important weapon in the armory of the Saivites.

But the first collective action on the part of the Saivites of Jaffna was a meeting held by a group drawn from the elite Vellala, Brahmin and Chettiar castes at the Siva temple at Vannarpannai in September 1842. Among the leading lights present were Sathasiva Pillai, Swaminatha Iyar, Viswanatha Iyar, Arumuga Pillai, Kandaswamy Pillai and Arumuga Chettiar.

The group decided to set up a “Veda-Agama” School to teach children the Vedas, the Agamas (the rules, ideology and traditions of temple worship) and the elements of Saivisim. The plan was to discourage parents from sending their children to Christian mission schools. The first Veda Agama school started functioning in 1842.

It was at this time that Arumugam Pillai (1822-1879) entered the scene with a bang. As Arumuga “Navalar” or simply as “Navalar”, he was to become Sri Lanka’s foremost Saivite/Hindu revivalist; the harbinger of Tamil nationalism; and the cutting edge of the long, and successful campaign against Christian proselytizing.

Taking the cue from Christian missionaries, Navalar made his religion relevant to real life. In his lectures, he would stress, apart from the theological and liturgical aspects of Saivism, the evils of adultery and drunkenness; the virtue of non-killing; the need to treat women with respect; the importance of giving alms; and the need to protect the cow.

Writing on Navalar’s view of the Agama scriptures, Hudson writes that he eliminated some of the popular aspects of  Hindu culture such as animal sacrifices and the worship of malevolent deities and demons that the missionaries attacked ceaselessly and that had no scriptural basis.

With the aid of wealthy persons in both Sri Lanka and Tamil Nadu ( with which he was in close touch), Navalar started many schools. These schools taught Saivism as well as modern subjects.

He put difficult Saivite poems and commentaries into easily understandable Tamil prose, which would also be as elegant and thought-provoking as the original. He designed a graded Saivite curriculum. The other important contribution of his was the establishment of the Saivite media in 1850 with a printing machine he brought at Madras.

Commenting on Navalar’s writings, a missionary wrote in Morning Star that Navalar had shown an “intimate and astonishing” acquaintance with the Holy Bible: and that he had “cunningly” defended the rituals, practices and lingam worship of the Saivas.