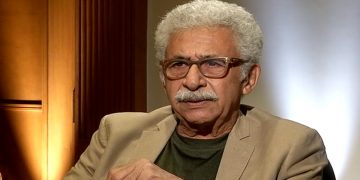 New Delhi, December 22 (Daily Hunt/One India): The Uttar Pradesh Navnirman Sena (UPNS) has said that it will send veteran stage and Bollywood actor Naseeruddin Shah an air-ticket for Pakistan following his comments on the Bulandshahr violence in which Hindu cow vigilantes murdered a policeman.

The actor found himself at the center of a major controversy over his remarks in reference to the killing of a policeman in Bulandshahr earlier this month.

He said the death of a cow was being given importance over killing of a policeman in the violence.

“If Naseeruddin Shah feels scared in India, he can go to Pakistan. The UPNS (Uttar Pradesh Navnirman Sena) has booked an air-ticket for him to Pakistan for August 14,” UPNS chief Amit Jani said.

“Like him, if anybody else feels scared, the UPNS will also book air-tickets for them to Pakistan,” he said.

Wondering why his comments on mob violence were being misconstrued with some people calling him a “traitor”, actor Shah said Friday in Ajmer that he spoke as a “worried Indian” and has the right to express concerns about the country he loves.

“What I said earlier was as a worried Indian. I have said this earlier as well. What did I say this time that I am being called a traitor? It is very strange,” Shah told reporters here at his alma mater, St Anselm’s Senior Secondary School.

“I have to bear criticism. If they have the right to criticise, then I also have the same right. I am expressing concerns about the country I love, the country that is my home. How is that a crime?” he asked.

Shah was responding to a question about the backlash he is receiving on social media following his remarks.

The actor had expressed anxiety over the growing mob violence in a video interview with Karwan-e-Mohabbat India, which the organiztion shared on its YouTube channel on Monday.

In the interview, the actor expressed concern over the well-being of his children, who he said have not been brought up as followers of any particular religion.