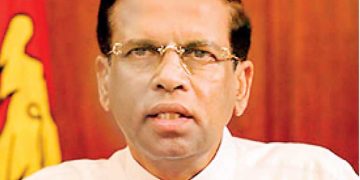 Colombo, January 18 (newsin.asia): Sri Lankan President Maithripala Sirisena on Wednesday asked the Attorney General to initiate legal action against those parties involved in the LKR 11 billion Central Bank Scam and those whose cases are before the commission inquiring into Serious Acts of Fraud, Corruption and Abuse of Power, State Resources and Privileges (PRECIFAC).

Actions will be based on the Penal Code, Public Property Act, and Money Laundering Act etc.

This decision was taken at a high level meeting in which the participants were: the Attorney General, Central Bank Governor, Commission to Investigation Allegations of Bribery or Corruption Director General, and senior lawyers.

The meeting reviewed progress in the action taken by them to punish culprits identified in the Bond Scam and PRECIFAC and Bribery Commission reports.

If investigations of the Commissions led to revelation of “additional” wrong doings, such persons will also be dealt with under the law. A special unit will be set up in the Crime Investigation Department  (CID)  under the instructions of the Attorney General to further investigate the financial crimes.

It has been recommended to get the support of Central Bank’s Financial Intelligence Unit and Exchange Controller for the purpose. A forensic audit examination in the CB has also been recommended.

An Amendment to the Civil Procedure Code is being contemplated to expedite legal actions to recover the loss to the government. The Attorney General will hold the properties accumulated illegally by the Perpetual Treasuries and companies attached to it through the Central Bank bond transactions.

The AG will look into the possibility of passing a separate Act in Parliament to recover the loss to the government and the Employees Provident Fund to avoid delays in court procedure.

Holding a forensic audit examination on the EPF involvement in Treasury Bonds and Treasury Bills transactions from 2008-2014 was also recommended . New laws will be introduced to empower the Central Bank to prevent repetition of similar incidents in the future.

The Speaker of Parliament would be directed to take action against the Committee on Public Enterprises (COPE)  members who had communicated with Perpetual Treasures Ltd.’s, owner Arjun Aloysius while the COPE probe was in progress and impose a Code of Conduct for MPs functioning in the COPE.

The President emphasized the importance of maintaining the highest level of transparency in the government from the highest positions to the lowest. He added that  there are lessons that can be learnt from the commission’s’ report in order to establish a national dialogue on how to respond to the malpractices in government intuitions and public officers.

The president advised the officers to take necessary steps to enact reforms to the Public Debt Department and the Monetary Board of the Central Bank in order to avoid such frauds in the future.

Considering the considerable interest of the public regarding the treasury bond issue, the President advised to release the place it on internet immediately .The report can be viewed on the website: www.presidentsoffice.gov.lk/.