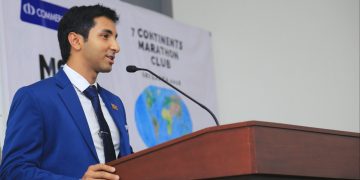 Colombo, March 29 (newsin.asia) – Sri Lankan born, Hassan Esufally aims to become the first Sri Lankan in history to complete one of the world’s most grueling marathon feats – running a full marathon in all seven continents of the world. Achieving this feat will propel him into a unique and exclusive club of the world’s greatest marathon runners – the 7 Continents Marathon Club™.

Achieving this goal would mean that Esufally needs to compete in and complete some of the most challenging marathons in the world.

“My goal is to become the first Sri Lankan to complete a full marathon in each of the seven continents by running in the world’s hardest and most exclusive marathons,” Esufally says. “My aim is to bring pride to Sri Lanka, to popularize adventure marathons, and hopefully to inspire others to also attempt these formidable goals. We may be a small island nation, but we have immense potential for sports and adventure and we need to keep pushing ourselves to achieve bigger and greater sporting goals.”

Hassan Esufally is no stranger to difficult challenges, having successfully completed the IRONMAN™ 140.6 Asia Pacific Championship in Cairns, Australia in 2016. This event includes a 3.86km swim, a 180km bike ride and a 42.2km full marathon run.

Completing the 2016 IRONMAN™, and running past the finishing line draped in the Sri Lankan flag, inspired Esufally to keep pushing the boundaries and he set his sights on becoming the first Sri Lankan to gain membership of the exclusive the 7 Continents Marathon Club™.

A full marathon is usually 42.2 km (26 miles and 385 yards being the historical measure) but each continent presents its own unique challenges and extreme conditions. Esufally has already completed marathons in the continents of Europe (Stockholm Marathon in June 2017), Asia (Colombo Marathon in October 2017) and Australia (Melbourne Marathon in 2014 and 2016) and this year he plans to complete the daunting task of completing marathons in the other four continents of the world.

In April, he will compete in the Boston Marathon in USA, the world’s oldest marathon event and one of the most prestigious races in the world. In June, Esufally will compete on the African continent, running in the Big Five Marathon in South Africa, where he will race on tracks in the African savannah among wild animals and running through the natural habitat of Africa’s “Big 5” species: Elephant, Rhino, Buffalo, Lion and Leopard.

In August, he will be in South America where he will participate in the INCA Trail Marathon, considered the most challenging and difficult marathon in the world because it takes runners through rocky mountain terrain at altitudes ranging from 8000m above sea level to nearly 14,000m above sea level. The INCA Trail Marathon follows the original pilgrimage trail that leads to Machu Picchu, the religious capital of the Inca Empire.

Hassan Esufally will complete his goal of completing marathons in seven continents of the world when, in December this year, he competes in the fourteenth Antarctic Ice Marathon in Antarctica, which takes place at 80 Degrees South, just a few hundred miles from the South Pole at the foot of the Ellsworth Mountains. This is truly a race for adventure marathoners as it presents formidable weather and running conditions: the underfoot conditions are snow and ice throughout, with an average wind chill temperature of -20˚C at an altitude of 700 meters. Runners also face the possibility of having to endure Katabatic winds, strong winds that come down through the polar plateau and can gather speeds of up to 300 kilometers per hour.

The 7 Continents Marathon Club™ is an exclusive club of elite marathon runners who have completed some of the most grueling marathons in the world. At present, there are only 271 members worldwide, 212 male and 59 female members. The Club is exclusive and reserved for athletes who are carefully vetted to prove they have run a marathon within the Antarctic Circle on the Antarctica continent, as well as on the other six continents.