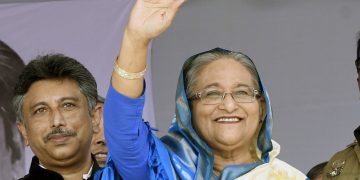 Dhaka, December 31 (BDNews24/newsin.asia): The people of Bangladesh on Sunday gave their mandate to the ruling Awami League of Sheikh Hasina to form a government for a record third straight term in an election marred by violence, allegations of rigging and withdrawals by opposition candidates. However, international observers from India, SAARC, Nepal and Organization for Islamic Cooperation (OIC) certified the elections as “credible”.

Hasina is set to become prime minister for an unprecedented third term after her party secured win in 267 constituencies of the 299 seats in parliament in which elections were held,  according to results released by the Election Commission for 298 seats until 9.30 am on Monday.

Elections Commission Secretary Helal Uddin Ahmed has been announcing the results from the commission headquarters in Dhaka since the voting ended at 4pm on Sunday.

The ruling party is followed by its key ally the Jatiya Party at 20.

The BNP, a key ally of the opposition alliance, has suffered a massive rout with just seven seats with   its allies in the Jatiya Oikya Front.

Reminiscent of Mujib’s Sweep in 1970

An observer said that the  results of the 2018 election is similar to the one in December 1970, when Sheikh Mujibur Rahman, the founder of Bangladesh and the father of Sheikh Hasina, was the head of the Awami League. In that election ,the Awami League had won 288 of the 300 seats in the East Pakistan Provincial Assembly and 160 seats in the national legislature.

EC Secretary Helal Uddin Ahmed has been announcing the results from the commission headquarters in Dhaka since the voting ended at 4pm on Sunday.

The ruling party is followed by its key ally the Jatiya Party at 20.

The BNP, a key ally of the opposition alliance, has suffered a massive rout with just seven seats with   its allies in the Jatiya Oikya Front.

Early indications of the massive margin of the victory for the Awami League were visible in the race contested by Bangladesh’s prime minister for the Gopalganj-3 seat.

According to the official results announced by Secretary Helal, Hasina received 229,529 votes from the 246,514 voters in the constituency.

The paddy sheaf candidate for the Gopalganj-3 set was SM Zilani, who received only 123 votes. The turnout at Gopalganj for the race was 93 percent, the EC secretary said.

Bangladesh went to the polls between 8am and 4pm on Sunday. Voting was suspended at 22 polling centres due to irregularities.

At least 17 people were killed in election violence in 11 districts across the country.

The Jatiya Oikya Front rejected the election results and called upon the Election Commission to hold new elections under a neutral government.

The alliance chief Kamal Hossain said they had received similar reports of voting frauds from nearly all voting centers in the country.

“You must cancel this election right away,” Kamal urged the EC. “We reject the so-called results and demand a new election under a neutral government.”

Dr Kamal Hossain and other leaders of the Jatiya Oikya Front alliance speaking at a press conference in Dhaka on Sunday night after daylong voting amid deadly violence. Alleging widespread rigging, the Oikya Front has demanded fresh elections.

At least 31 candidates running independently or as candidates of the BNP, Jamaat-e-Islami or Jatiya Oikya Front pulled out of the race midway.

Asked what steps he would take if his demands were not met, Kamal Hossain said: “We will sit tomorrow and discuss in detail what to do. We will continue our movement to institute democracy. We will provide further details at a later time.”

Asked what he would do if the Oikya Front won the polls, BNP Secretary General Mirza Fakhrul Islam Alamgir said: “We are boycotting the entire election. This is not an election. This is a cruel mockery of democracy.”

“We will inform you of our decision tomorrow,” he added. “Many people believe we were wrong to boycott the polls on Jan 5, 2014,” he said. “But today proves us right.”

The Bangladesh government has made sure the election is participated by all parties, Gowher Rizvi, international affairs adviser to the prime minister, has told foreign observers.

In a post-election briefing at Hotel Sonargaon, he claimed the government has also ensured free access for all voters and maintained a “very calm” environment for polls.

“I’m pleased because we have kept the promises we made,” he said. Eighteen people, he said, were killed in the polls and of these, 12 were members of the Awami League.

Earlier, HT Imam, political affairs adviser to the prime minister, said, “A powerful team of observers has arrived from the OIC, the Commonwealth and from India. They are high-profile individuals, famous journalists and observers.”

After visiting several centers, including some at Wari, Munshiganj and Narayanganj, they talked with journalists in the afternoon at Sonargaon hotel in Dhaka.

The Head of the three-member Indian delegation and Chief Election Officer of West Bengal Ariz Aftab said they visited several centers and found that the voting took place in a proper manner and festive mood, reports the Bangla Tribune.

He said they were in contact with the Election Commission and that was why they came here to observe the polls.

When asked about polls-related violence and deaths, he said it was not desirable but the incidents could be termed as “accidents.”

At least 18 people were killed during clashes and violent incidents through the polls, held between 8am and 4pm in 299 constituencies on Sunday.

Opeloyeru said they saw polling agents of Awami League, BNP and Communist Party of Bangladesh at the centers they visited.

About the credibility, he said election officers had done their jobs to ensure that voters exercised their voting rights.

As the international standard was fulfilled, it could be said that the election was credible, he added.

Later in the evening, head of the Nepal delegation Dipendra Kandal told reporters that they visited several centers in Dhaka 6 and 13 constituencies as they were interested seeing the electronic voting machine (EVM) system in action.

He said Bangladesh introduced the EVMs on a pilot basis and they found that the election environment was peaceful.

Meanwhile, in the morning, Saarc delegation member Tania Foster told reporters that they visited five center and saw that everyone was getting access to polling centers to able to cast their votes.