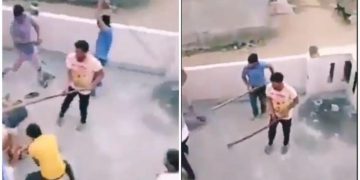 Gurugram, March 23 (India Today): At least 35 to 40 goons assaulted three to four people belonging to a Muslim family in Bhondsi area, Gurugram on Holi (March 21). A video showing the assault has surfaced online.

Reports claimed that the goons told the Muslim family to go to Pakistan.

An FIR under various Indian Penal Code (IPC) sections, including an attempt to murder among other sections, was registered in Bhondsi police station after which the police arrested six of the attackers.

ACP (Crime) Shamsher Singh said that the victims were playing cricket outside their residence in Bhup Singh Nagar in Gurugram around 5 pm on Holi when the incident took place.

“As per a statement made by one of the victims, identified as Shahid, the attackers were inebriated and asked the victims not to play cricket on the street. Following this, both the groups got into an argument and the goons trashed the victims with batons, iron rods, hockey sticks, and water pipes,” said Singh.

As the victims tried to escape, a few attackers followed them and thrashed them inside their house until Shahid lost consciousness.

Meanwhile, the other goons pelted stones at the house. The attackers thrashed them even after the victims’ family members kept pleading them to stop and leave the house.

One of the victims filmed the entire incident in Gurugram. “We have video grabs of the incident and efforts are on to identify other accused,” Singh added.

Meanwhile, Shahid’s father Mohamad Shamshad claimed that they tried to contact the local police many times but the police didn’t come to the rescue and the attackers kept beating them for about half an hour.

Reacting to the assault on the Muslim family, users took to Twitter to slam the incident.

A user wrote, “This is New India, some Hindu person attack on Muslim family in a developed city of Gurugram. What’s the thinking of such people and government of India about Muslims.”

Another user tweeted, This is what Modi’s #NewIndia is all about.”

A user also said, “This is so ridiculous. Justice must be given.”