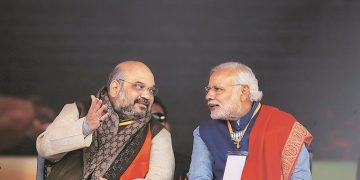 Given recent by-poll setbacks, BJP may find it hard to get back to power in 2019

Given recent by-poll setbacks, BJP may find it hard to get back to power in 2019

by Editor
in Around South Asia, Around The World, India, Top Story
Reading Time: 5min read
1 0 Colombo, March 17 (DailyFT): Given the recent by-election setbacks in the Hindi-Hindu and populous North Indian heartland now ruled by it, the Bharatiya Janata Party (BJP) may find is hard to get back to power in 2019, writes P. K.Balachandran in DailyFT.

When the BJP-led National Democratic Alliance (NDA) won the May 2014 Indian Parliamentary elections grabbing 336 seats in a House of 543, the popular notion was that the BJP had come stay, and that its Supremo, Narendra Modi, would be Prime Minister for the next 20 years.

But the euphoria of Modi’s fans called bhakts (devotees) was short lived.

As the BJP Government stepped into 2015, the party lost the Delhi Assembly elections comprehensively, getting only three seats in a House of 70, when only a few months earlier, it had swept all the seven parliamentary seats in the State.

People who had overwhelmingly supported the BJP and its iconic leader in 2014 showed them the door the very next year. The reason was arrogance which had come with the acquisition of absolute power.

The Delhi results signalled the harsh truth that the Indian electorate could not be taken for granted or for a ride through media theatrics. But ruling parties bestowed with humongous majorities invariably take the electorate for granted, try to sell style as substance, and hope to succeed. It is this formula which the BJP government had adopted and is still applying, even in the face of defeats in a number of elections.

Although the BJP won some elections like the State Assembly elections in Uttar Pradesh, Uttarakhand, Himachal Pradesh, Arunachal Pradesh, and Tripura convincingly, due to a strong anti-incumbency factor in each case, it has also lost several by-elections including in States in which it is the ruling party.

These defeats indicate that the BJP is encountering the anti-incumbency factor as India moves closer to the next Parliamentary elections in May 2019.

The most recent setback was the defeat of the BJP in Uttar Pradesh and Bihar. It lost all the three Parliamentary by-elections held there. A simple combination of the Samajwadi Party (SP) and the Bahujan Samaj Party (BSP) dented the BJP’s hold in UP. Both Chief Minister Yogi Adityanath and his Deputy K.P. Maurya lost their electorates.

The result in UP was shocking also because it was only in March 2017 that the BJP had  swept the State  Assembly elections and  in 2014,  it had won 73 of the 80 Parliamentary seats in the State.

In 2017, the BJP-Akali Dal Alliance Government in Punjab was defeated by the Congress. The Congress was to repeat its success in the local bodies elections held in December that year. In the March 2018 State Assembly by-elections in Madhya Pradesh, the Congress retained two of its seats in a tough competition with the BJP Government, throwing its full weight behind the BJP candidates. In Rajasthan, another BJP-ruled State, the Congress scored a hat trick by winning two Parliamentary seats and a State Assembly seat which were up for grabs.

In Meghalaya, as in Goa earlier, the Congress had emerged as the single largest party, but could not form the government because of its inability to sew up an appropriate post-election alliance, skill BJP has been good at.

Sensing their weakness in this department, the non-BJP parties are now in talks to form alliances. Being the largest party with the highest stakes, the Congress is taking the lead in these efforts.

Given the growing weakness of the BJP-led Government and moves to unite the opposition, the Telugu Desam Party (TDP) of Andhra Pradesh has left the NDA and is going to move a No Trust Motion against the government in parliament. The TDP’s complaint is that the Modi Government had refused to give the State special funds.

The main reason for the growing public alienation from the BJP regime is its lackluster performance in the economic sphere despite the launching of schemes and coining of attractive slogans.

Demonetization in 2016 hurt the most vulnerable sections of the population. The Goods and Services Tax (GST) has the highest rates in the world according to the World Bank. As a result of demonetization and GST, many small enterprises closed down creating unemployment.

The Government’s Labour Bureau said there was an absolute decline in employment between 2013-15 and 2015-16, perhaps for the first time in the 70-year history of independent India. According to the Centre for Monitoring Indian Economy, 1.5 million jobs were lost in India across all sectors in the first four months of 2017.

The loss of jobs was especially evident in sectors that had been creating employment opportunities in the recent past, sectors such as construction, manufacturing and information technology. The IT sector, which employs nearly four million youths laid off many in the past year and many more are to be made redundant in the coming years.

Citing official data, The Telegraph reported that 1.55 lakh jobs were created in 2015 and 2.31 lakh in 2016, the lowest levels since the 10 lakh jobs created by the Congress-led United Progressive Alliance (UPA) Government in 2009. Economic growth is not translating into job creation.

Many of the bank loans that have not been repaid had been given to large companies that are now highly leveraged, meaning these companies are saddled with large debts on their balance sheets.

With new loans not being disbursed, investments in the manufacturing industries have slowed thereby resulting in jobs not being created. The economy of the world’s largest democracy is growing at a pace that is the slowest in the last three years, according to an economist.

Most other major economies in the developed and developing world saw a higher growth in GDP and employment in what is generally seen as a year of global economic recovery. But India has not participated in this global recovery.

The Government is hiding the fact that much of the FDI inflows have come from the purchase of distressed companies and are not new investments.

The Modi Government has already lost four of its five year term, but there are still miles to go in terms of promises to be fulfilled.

The Telugu Desam Party (TDP) quit Prime Minister Narendra Modi’s coalition on Friday blaming it for a lack of financial support, officials said, in a blow to the coalition ahead of national elections next year ,adds Reuters.

The party, that runs Andhra Pradesh, had been demanding greater financial assistance ever since the division of the state in 2014 which it says led to loss of revenue.

“We tried our best to be together but the present government ignored the sentiments and emotions of the people of Andhra Pradesh,” Y.S. Chowdary, a TDP member of parliament, said.

Last week, the party pulled its two federal ministers from the government after talks with Modi’s emissaries failed and on Friday it announced it was pulling all its MPs out of the federal coalition.

The loss of the regional ally is the second since January when the right wing Hindu group, the Shiv Sena, announced it would not run in next year’s national election in alliance with the BJP.

Modi has run the ruling coalition with a tight hand, analysts say. The BJP blamed the TDP for the row and said it would build up its own strength in Andhra Pradesh.

“People of Andhra Pradesh have now realised that the TDP is resorting to lies to cover up its inept governance,” said BJP spokesman G.V.L.N. Rao.

The BJP’s troubles with its regional partners come at a time opposition parties are trying to band together ahead of next year’s election.