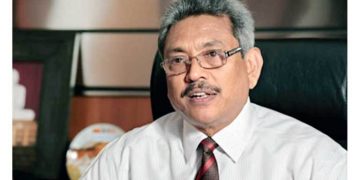 Colombo, October 2 (newsin.asia): Gotabaya Rajapaksa, a front-runner in the Sri Lankan Presidential election to be held on November 16, is facing a serious issue over his Sri Lankan citizenship, days before the date for filing of nominations.

Nominations are to be filed on October 6 and the case against him, filed in the Court of Appeal by two civil society activists, was taken up on October 2.

If the court rules against him, Gotabaya, who is the candidate of former President Mahinda Rajapaksa’s  popular Sri Lanka Podujana Peramuna (SLPP), will not be able to contest the election. It will then be a cakewalk for his nearest rival, Sajith Premadasa, of the ruling United National Party (UNP).

Petitioners Gamini Viyangoda and Prof.Chandraguptha Thenuwara have questioned Gotabaya’s Sri Lankan citizenship and the issuance of a Lankan passport and a National ID card to him.

Mahinda Rajapaksa, the 6th Respondent, who is a brother of Gotabaya, was President of Sri Lanka at that time, and was the person who allegedly issued the impugned Dual Citizenship certificate to Gotabaya Rajapaksa.

The petitioners said that they were perturbed by a story in the newspaper Daily FT which indicated that there was a potential threat of a non-national contesting for the Presidency of Sri Lanka.

The petitioners said that they were aware that, in terms of Articles 92 read with 89(a) of the Constitution, a person who is not a citizen of Sri Lanka, is not qualified to be elected to the office of the President of Sri Lanka.

The petitioners then made a complaint to the Inspector General of Police, by a letter dated August 8, 2019, seeking an expeditious investigation into the matter.

The petitioners said that they were deeply disturbed by certain news items published on 20th September 2019 suggesting that the Magistrate’s Court of Colombo had rejected a request made for the arrest of Gotabaya Rajapaksa and / or rejected a request by the CID to question him.

But a statement issued by the Sri Lanka Police suggested that no application for arrest and / or questioning had been made by the CID.

In view of the confusion created, the petitioners filed a motion to obtain copies of the documents filed in the Magistrate’s Court of Colombo, pertaining to their complaint. Upon obtaining certified copies of the reports, the petitioners became aware that the purported document tendered by Gotabaya Rajapaksa as his “Dual Citizenship Certificate” is manifestly and ex facie a fraudulent document inasmuch as, inter alia, the document is purportedly signed ‘for’ a Ministerial  Secretary and not by the Ministerial Secretary as such.

The petitioners aware of the Regulations / Guidelines governing the grant of Dual Citizenship.  These are contained in the regulations prescribed in 1993, and approved by parliament on 18th August 1993.

They noted that between 18th November 2005 and 24th November 2005, there was no Secretary to the relevant Ministry, and as such, no person could have signed on behalf of such a “Secretary”, as falsely and fraudulently claimed by Gotabaya Rajapaksa.

The document is therefore a fabricated or fraudulent one, the petitioners said.

Thus and otherwise, the purported Dual Citizenship Certificate is null and void and of no force and / or effect in law, the petitioners said.

The purported Dual Citizenship Certificate allegedly issued by President Mahinda Rajapaksa  to his brother, Gotabaya Rajapaksa, was not issued by the authority prescribed by law.

Thus and otherwise, the purported Dual Citizenship Certificate is ultra vires the applicable law (including the Citizenship Act), null and void and of no force and / or effect in law.

The petitioners claim that there is no file in the possession of the Department of Immigration, or the Ministry of Defense, pertaining to Gotabaya Rajapaksa’s purported Dual Citizenship and / or the grant of Sri Lankan citizenship to him.

There has been tampering with the records of the Department of Immigration / Citizenship Register, apparently to claim that a Dual Citizenship Certificate was issued to Gotabaya Rajapaksa, the petitioners alleged.

“In the aforesaid circumstances, the issuance of, inter alia, the Passport No.8305500 and the National Identity Card No. 194917210010 have been issued ultra vires the applicable provisions of law, inasmuch as, inter alia, Gotabaya  Rajapaksa was not a citizen of Sri Lanka at the time of issuance of such documents,” the petitioners argued.

The petitioners went on to say that under the circumstances it had become necessary for them to seek, inter alia, Writs of Certiorari and Prohibition quashing the purported Dual Citizenship Certificate, Passport No.8305500, and National Identity Card No. 194917210010 (P11) and prohibiting the recognition of Gotabaya Rajapaksa as a citizen of Sri Lanka.

In view of the impending Presidential Election (on November 16), and the adverse impact on the right of franchise of the citizenry (including those who may vote for the noncitizen Gotabaya Rajapaksa ), and the grave and irreparable harm and damage that would be caused to the petitioners and the citizens of Sri Lanka (including inter alia the threat to the territorial integrity, sovereignty, and national security of Sri Lanka) if a non-citizen is permitted to contest for the Presidency, it has become necessary to seek interim relief including:

(a) interim orders suspending the operation of the purported Dual Citizenship Certificate,  Passport No.8305500, and National Identity Card No. 194917210010;

(b) restraint on the respondents from acting on the basis that Gotabaya Rajapaksa is a citizen of Sri Lanka;

(c) restraint on Gotabaya Rajapaksa, his agents and servants, from holding out and / or representing and / or claiming that he is a citizen of Sri Lanka, until the hearing and determination of this application.