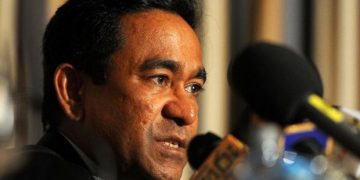 Yameen’s political political party, the Progressive Party of the Maldives (PPM), has in a press release said that it should be noted that the High Court had overturned the Criminal Court’s ruling incarcerating Yameen before the completion of the case saying that it was “wrong” and “devoid of legal grounds”.

The PPM release said that when there were allegations about the dealings of the company SOF in which many leading politicians and government officials had investments, Yameen as President himself, had  volunteered to submit to investigation his dealings with the company and the self-declared US$ 1 million kept in his personal account. He offered to keep it in an escrow account.

When the matter was investigated by a Presidential Commission, the Central Bank said that there was no  case for any investigation. into SOF has it had had no overseas dealings.

This being the case, the actions of the Soilh government smacks of a politically motivated “smear campaign” and  political vendetta, the PPM said.