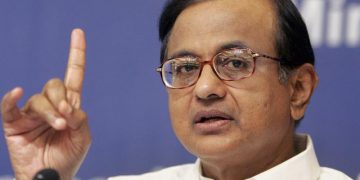 According to a PTI despatch,  Chidambaram said that the situation in Kashmir is “sliding into total chaos”.

“The PDP-BJP government is squarely responsible for the sharp deterioration in the last 6 weeks,” he said in a statement.

The statements of the Prime Minister, Home Minister Rajnath Singh and Defence Minister Manohar Parrikar have “exacerbated” the crisis, he charged.

“Moderation in words and actions alone can retrieve the situation. The loss of lives — of protesting youth, other civilians and security forces — has devastated all of us. This must stop,” he said.

Chidambaram said he is afraid the way out of the crisis cannot be found by the present government.

“The Congress, National Conference and, if willing, the PDP must come together to find a solution: firstly, an immediate solution to stop the violence and, then, a path forward that will bring hope, peace and prosperity to the people of Jammu and Kashmir,” he said.

Normal life in Kashmir Valley has been affected due to protests against the killing of Hizbul Mujahideen commander Burhan Wani in an encounter with security forces on July 8. 66 persons have so far been killed. The valley has been under cufew for 40 days now ,with no sign of it being lifted any time soon.

Meanwhile, Kashmir Times reported from Srinagar that five persons were killed in security forces firing on protestors at two different places in Kashmir today on Tuesday. Dozens of others were injured in clashes in several parts of the state.

Four persons were killed in Central Reserve Police Force firing at Aripathan village in Budgam district and one in Larkipora in Anananag.

The security forces sealed the roads with barbed wire and armored vehicles. The old city of Srinagar was already under curfew. Armored army vehicles were seen patrolling Residency Road and some other areas. Army vehicles were also spotted near Civil Secretariat.

Reports from Aripathan said that protest demonstrations were held last night in the village when security forces tried to raid different houses for making arrests. However, due to protests, the security men did not make any arrest.

The locals said this morning that some people, mostly youth, moved out from their houses to get newspaper copies from local shops. CRPF personnel stationed at Magam Police Station along with a police party also reached the spot. They fired tear-smoke shells. Locals alleged that as youth tried to enter the village, security forces followed them, lobbing tear-gas shells. Some of them barged into the houses, ransacking them and smashed windowpanes.

The people again took to the streets and held protest demonstrations and raised slogans. They accused the security men of atrocities. Reports said that some of the youth pelted stones on the forces, who retaliated with bullets and pellets killing a youth on the spot while leaving more than two dozen people including women wounded.

Some locals tried to shift the critically injured to Magam Hospital. But security men allegedly blocked the road and did not allow the injured to be shifted to hospital, forcing the people to return. The injured were admitted in Sub-District Hospital Beerwah where doctors shifted three of them to Srinagar hospital.

However, police claimed that protesters targeted a CRPF contingent that was passing through the road. In a bid to stop youth the CRPF retaliated resulting in the casualties, police claimed.

A youth identified as Amir Ganie, son of Mohammad Yusuf Ganie of Naidpora, was killed when security forces opened fire at protesters at Larkipora Anantnag. Majid Mehrab, Medical Superindentent of Anantnag hospital, confirmed that the youth was brought dead. He said that youth had died due to bullet injury. Reports said that the killing sparked protests in Naidpora, Larkipora and its adjoining areas. Thousands of people carried out a procession in the area.

Locals said that before killing the youth at Larkipora,  Army personnel from 19 Rashtriya Rifles  committed atrocities in Dayalgam. They added that an Army patrolling party appeared in Dayalgam area and ordered some youth to remove Pakistani flags from the village. According to locals,the army men thrashed the people and barged into houses, creating havoc.

The action of the army sparked protests, forcing it to move away from the village. The locals alleged that the same patrolling party entered into Larkipora village where they shot dead a youth. Reports said that agitated youth torched the house of one Sajad Ahmed who was working for the Indian Territorial Army. Locals alleged that it was Sajad who instigated the army to act against the local population. Clashes erupted in Kurhama and Borsu areas of central Kashmir’s Ganderbal District after security forces allegedly ransacked houses and smashed windowpanes.

Meanwhile, unidentified militants attacked a police post at Kakapora injuring three cops. Reports said a grenade was hurled at the police which exploded with a big bang. Three persons were injured in the blast.