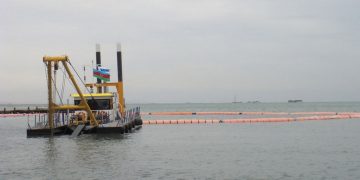 Colombo, Oct 1 (NIA) – A dredger has arrived in Sri Lanka to start reclaiming 269 hectares of sea off the capital Colombo in order to construct the Colombo Port City project.

Sri Lanka’s Geological Survery and Mines Bureau has issued a license to start mining sand on September 26, the Chinese investor of the project said.
China Harbour Engineering Company (CHEC), the contractor, will install buoys along the dredging zone to guide fishing vessels and the reclamation site will also be demarcated to allow environmental monitoring.
The Project Company now has all required permits and consent to carry out the reclamation work in keeping with the Development Permit issued by the Department of Coast Conservation and Coastal Resources Management.
Dredging will be restricted to at least four kilometres from the shoreline and to depths over 15 metres. Up to three meters of sand will be dug out and sediments 0.5 meters will be maintained, the firm said.
All the dredgers will be equipped with AIS system, long range radar, light system, CCTV, and state of the art communication system to ensure navigational safety.
The 1.4 billion dollar Port City project which initially began construction in September 2014 under the former government was suspended in March 2015 by President Maithripala Sirisena’s government due to environmental concerns.
However in March 2016, the project was given the nod from the government stating that the project would convert Sri Lanka into an international hub in the region.
The project which has now been expanded to 269 hectares under a new Tripartite agreement will include central parks and beaches for the public. The project is also expected to create thousands of jobs in the island country.
SendShare1Tweet1ShareShare