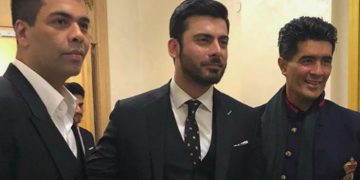 Dubai, March 31 (Geo TV): Pakistani heart throb Fawad Khan has been honored by the Indian film magazine Filmfare once again. Fawad was honored with the title of Best Cinematic Icon Pakistan/India at an event at Bollywood Parks in Dubai on Friday.

The actor is in Dubai for relaunch of Filmfare Magazine (Middle East).

While India has banned Pakistani talent from its film industry, the event provided a platform for artistes from both countries to come together.

Fawad was the first Pakistani actor to win a Filmfare award for Best Debut in India for his first Bollywood film Khoobsurat.

Fawad, who has previously worked in Karan’s Ae Dil Hai Mushkil, was also seen at the event with the director and designer Manish Malhotra.

Mehwish Hayat said that it was regrettable that Indian and Pakistani artistes have to find a neutral place to meet. She hoped that a day will soon dawn when they can visit each others countries and show their films. As of now Indian films are allowed to be screened in Pakistan but not vice versa she pointed out.