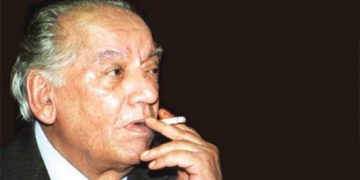 Even reciting a poem by Pakistan leftist poet Faizi Ahmad Faiz for recitation is seen as a grave threat to the ruling class. New Delhi, January 10: It all began with control over what you eat, who you fall in love with and marry, and which country you can play a sport with. Prime Minister Narendra Modi’s Hindutvik regime of restrictions and diktats in India has now spread its tentacles to telling people which poem or whose poem they can or cannot recite.

The rising forces of Hindutva in North India dictated that beef shall not be eaten and that the cow should not be slaughtered even for its hide. Anyone who did or was suspected to be breaking this ban (who happened to be mostly Muslims and Dalits) was lynched by the “Go Rakshaks” or cow vigilantes.

Since the Bharatiya Janata Party (BJP) came to power with a humongous majority in May 2014, many Muslims were killed by lynch mobs in North India.

Along with the diktat on food came the campaign against “Love Jihad.”  Love Jihad was the name given to an alleged plot by Muslims to entice Hindu women into romantic relationships and marriage with an ulterior motive to convert them to Islam and marry them to increase the population of Muslims in India. Whether it was a case of lynching for possessing beef or a case of Love Jihad, it  was the victim or his family which was booked by the police for transgression of some law. The accusers or perpetrators of violence or harassment went scot free.

Prior to this, there was a prohibition against playing any sporting match with Muslim majority Pakistan; inviting  Pakistani artistes to perform in India; or employing them in the entertainment industry like films.

Such caste-like exclusivism imposed by Hindutva zealots backed by the State, is now being extended to choosing poets to read or recite. In the prestigious Indian Institute of Technology (IIT) in Kanpur, faculty member Dr.Vashi Mant Sharma complained that in the on-going student struggle against the controversial Citizenship Amendment Act (CAA), some students of the institute had recited “Hum Dekhenge” (We’ll See) a poem written by the Pakistani poet Faiz Ahmad Faiz.

In his complaint to the authorities in the institute, Sharma said that the reference in the poem to “idols” being “destroyed” and “rulers” being overthrown by the will of “Allah” showed that those who recited the poem were unleashing a campaign against Hinduism and the Hindu rulers of India.

Later, when it was pointed out that Faiz wrote “Hum Dekhenge” against Pakistan’s Islamic dictator Zia-ul-Haq and that Faiz had used Islamic terminology and symbolism in his poem to drive home his revolutionary intent, Sharma changed his argument and said that the students had no right to recite a Pakistani’s poem when there are revolutionary Indian poets to choose from. Sharma’s complaint about the students’ allegedly seditious and communal intent is now being considered by a committee of the IIT.

When news about this came out, famous Indian Urdu poet Javed Akhtar remarked that Sharma’s objections and IIT Kanpur’s considering them for action showed ignorance of the context in which the poem was written, the ruler targeted and the reason why Faiz chose the Islamic idiom.

The context was Zia’s intolerant Islamic dictatorship; the “idols” referred to were the self-proclaimed illegitimate military rulers of Pakistan; and the “Allah” referred to was “God” in general. Faiz used the Islamic idiom so that the common man will understand what he wants to convey.

As Indian Marxist leader, Brinda Karat, said on NDTV, that Faiz was an inveterate communist all his life, and was a crusader against all forms of sectarianism and oppression. In his “Subh-e-Azadi”, he expressed anguish over the partition of India into a Muslim Pakistan and a Hindu  India.

“During the Bangladesh war, his was one of the most powerful voices from Pakistan in support of the liberation war of the people of erstwhile East Pakistan and against the terrible violence and bloodshed unleashed by the Pakistani armed forces,” Karat said.

In one of his poems titled “Stay Away from Me”, he spoke in the voice of nascent Bangladesh: “There’s a poverty of blood in my ravaged body, a terrible poison now runs in it…the burning seal of a rage hushed up for years, beware of me…”

One of the reasons why Faiz was so hated by the right-wing forces and fundamentalists in Pakistan was because his style of writing included the use of religious metaphors to convey a revolutionary message which was extremely popular and effective, Karat pointed out.

Faiz  spent a good part of his life in Pakistani jails and exile abroad for his uncompromising stand against authoritarianism, religious fanaticism and militarism. Cambridge educated Faiz was a lecturer in English but was an Urdu poet. Before the partition of India in 1947, Faiz was part of the All India Progressive Writers’ Association, which had writers like Krishen Chander, Ismat Chughtai, Upindranath Ashk, Ahmed Nadeem Qasmi, Sahir Ludhianvi, Mirza Adeeb and Sibte Hassan.

When a group of Pakistani military officers led by Maj.Gen  Akbar Khan wanted to establish a leftist dictatorship as opposed to the pro-US government led by Prime Minister   Liaquat Ali Khan in 1951, Faiz joined the group. When the “Rawalpindi Conspiracy” failed, Faiz was arrested and jailed for four years. When Pakistani army chief Gen.Ayub Khan seized power in 1958, Faiz was in the USSR. He was advised not to go back to Pakistan, but he did, only to be put in jail for six months.

In 1962, the USSR conferred on him the Lenin Peace Prize. Holding  out hope for humanity, Faiz said: “I believe that humanity, which has never been defeated by its enemies, will, after all, be successful; at long last, instead of wars, hatred and cruelty, the foundation of humankind will rest on the message of the great Persian poet Hafez Shiraz: Every foundation you see is faulty, except that of Love, which is faultless.”

The Lenin Peace Prize helped lift Faiz’s international image high. He was invited to speak in many countries and was especially feted in the socialist world and those allied with the Soviet bloc. His poetry was translated into dozens of languages.

After the creation of Bangladesh, the new civilian government of Zulfikar Ali Bhutto offered Faiz a position as Cultural Advisor to the Ministry of Education. After some deliberation, Faiz accepted it to promote culture at all levels. He created the Pakistan National Council of the Arts as well as the Lok Virsa, an Institute of Folk Heritage.

In 1974, Faiz was part of a delegation that accompanied Prime Minister Bhutto to the newly established State of Bangladesh, to repair relations with it. While the official visit did not accomplish much, Faiz, at the request of Bangladesh President Sheikh Mujibur Rahman, an old friend, composed “Dhake say waapsi par” (On return from Dhaka) to express his sadness about the events which led to the break-up of Pakistan into an Urdu speaking Pakistan and a Bengali speaking Bangladesh.

August 1977 saw the end of Bhutto’s government through another military coup led by Gen.Zia-ul-Haq . Once again political and trade union activities were banned. Faiz was under surveillance. He escaped to Lebanon in 1979 when Bhutto was hanged. However, he came back to Pakistan because of poor health. A broken man, Faiz died in 1984. But he had the satisfaction of hearing that he was nominated for the Nobel Prize for literature.