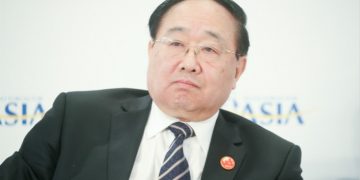 by Editor
in Around The World, Business, China
Reading Time: 3 mins read
4 0 By Li Liuxi and Fran Wang

Beijing, April 19 (Caixin Global): Li Ruogu, the former head of one of China’s main lenders for projects related to the “Belt and Road” initiative has issued a rare warning about the dangers of investing in many countries involved in the program. Many of them may not be credit worthy and may not be able to return the loans.

Li, ex-chairman and president of the Export-Import Bank of China (China EximBank), one of the country’s three policy lenders, said that although many countries along the Belt and Road route need huge amounts of capital for their development, they have high debts and low credit ratings, making it difficult for them to raise funds.

“There are few countries with credit ratings above the ‘BB’ level and the investment risks are relatively large,” Li told a forum in Beijing, referring to a ranking that denotes a country’s debt is considered below investment grade.

“Raising enough funds for the development of these countries is arduous,” he said.

The Belt and Road was unveiled in 2013 by President Xi Jinping. Its aim is to strengthen trade ties with countries in Asia, Africa and Europe, primarily through infrastructure investment and construction. Chinese officials have also said they want to boost the use of the Yuan in nation involved in the initiative, part of the government’s ambitious plans to enhance the global influence of the Chinese currency.

The initiative currently includes 72 countries, according to the Chinese government-run website yidaiyilu.gov.cn.

Li, a former deputy governor of China’s central bank, was head of EximBank for 10 years before retiring in 2015. He is currently an academic with the People’s Bank of China’s graduate school.

Although Chinese think tanks have given similar warnings about the Belt and Road, it is unusual for individuals holding public office or retired officials to openly express caution about the initiative.

Li pointed out that many Belt and Road countries hold “limited” attraction for foreign investors and they should formulate preferential policies that would be conducive to luring more money, including in areas such as foreign exchange, tax and labor, and standardize laws and regulations on issues such as market access, driver’s licenses and visas to enable capital and people to flow more easily.

Zhou Xiaochuan, former Governor of the People’s Bank of China, at the same forum called for the projects to have a single currency for settlement and for Belt and Road countries to build more developed equity and bond markets and other financial tools to provide stable sources of funding.

The shortfall in infrastructure investment in all Belt and Road countries was estimated to be more than $600 billion a year, Zhou said, around 4% of their total gross domestic product in 2016, according to World Bank data.

China’s banking watchdog in November issued regulations specifically for the three policy banks, which also include China Development Bank and the Agricultural Development Bank of China, to strengthen capital adequacy requirements and enhance oversight of their risk controls.

A banking executive, who declined to be named, told Caixin at the time that the policy lenders’ involvement in the Belt and Road was one of the reasons that regulators had become more concerned about the strength of their capital buffers and ability to manage risks.

By the end of 2017, China EximBank had outstanding loans of more than 700 billion yuan ($111.3 billion) to nearly 1,500 projects in more than 50 countries that are taking part in the Belt and Road, mainly in sectors such as transportation, power, telecommunications, high-tech and energy, Chen Bin, head of the lender’s branch in the southern province of Guangdong, was cited by the Nanfang Daily newspaper as saying in January.

Zhou told the conference that Chinese banks have granted more than $200 billion for Belt and Road projects.