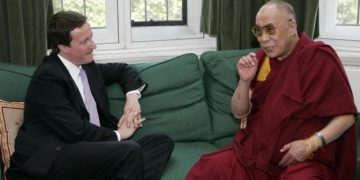 Europe should be for Europeans and refugees should be sent back after training, says Dalai Lama

Europe should be for Europeans and refugees should be sent back after training, says Dalai Lama Dharamsala, June 29 (BBC): He is, without a doubt, one of the best-known people on the planet. In an age where celebrity is worshipped, the Dalai Lama is a faith leader who has become a spiritual superstar.

As he approaches his 84th birthday, the monk who has handed out millions of handshakes and crafted as many inspirational quotes, is candid and at times shocking.

I met him at his residence high in the mountains, in the town of McLeod-Ganj near Dharamshala in the northern Indian state of Himachal Pradesh.

For a man so revered – seen as superhuman by many – he was refreshingly down to Earth. As he entered the room wearing his trademark red robes, assisted by his aides, he emanated the air of an approachable Clark Kent rather than an unearthly Superman.

And yet this is a man who has met world leaders and shared stages with pop stars and actors. A man who has long been a thorn in China’s side.

“One Chinese official once called me a demon,” he said laughing, before raising his hands to his head to mimic horns. “When I first heard that, my response was – yes, I’m a demon with horns.”

“I pity their ignorance, their political thinking is very narrow-minded,” he added as he chuckled.

The grudge with China is longstanding and has defined his entire life. The Dalai Lama was forced to flee his home of Tibet in 1959 after China sent troops into the region.

He sought refuge in India and for six decades has been living in exile in Dharamsala along with some 10,000 Tibetans. His monastery – which overlooks the snow-capped peaks of the Dhauladhar range in the Himalayas – is breathtakingly beautiful. But the view is bittersweet.

His life’s cause – to return home – remains a distant dream, even if he insists it may yet happen. “The Tibetan people have trust in me, they ask me [to] come to Tibet,” he says.

But in the next breath he adds that India has also become his “spiritual home”. An implicit acceptance, perhaps, that his goal of an autonomous Tibet is far from reality.

While he “formally” stepped down from political responsibilities in 2011, as the spiritual leader of the Tibetan people he has continued to be their figurehead.

There haven’t been talks between his representatives and China for many years.

The Dalai Lama told me China’s President Xi Jinping had yet to ask him for a meeting. He did tell me that he had had some discussions with retired Chinese officials in the past few years, but none of these seem to have moved the dial.

In the 1950s, when China first sent troops in, Tibet was poor. Now it is an economic behemoth and its growing influence has in many ways overshadowed the Dalai Lama’s cause.

There was a time when the Dalai Lama was the toast of capitals around the world as US presidents lined up to meet him. George W Bush famously presented him with the Congressional gold medal while Barack Obama met him on a number of occasions, including in Delhi in 2017 after he left office.

But relations with the current occupant of the White House are very different. Despite being open to a meeting with President Donald Trump, the Dalai Lama told me that Mr Trump, who is close to China’s Xi, had never asked for one.

The Dalai Lama’s advancing years may have curtailed his foreign travel schedule, but the spiritual leader says he hasn’t received a call from Mr Trump either.

In a scathing assessment, he said the 45th president’s time in office was defined by a “lack of moral principle”, a contrast to remarks made in 2016 when he said he had “no worries” about a Trump presidency.

“When he became president he expressed America first. That is wrong,” the Dalai Lama told me.

The withdrawal from the Paris climate accord and the migrant crisis are two big areas of concern. “When I saw pictures of some of those young children, I was sad,” he said of the situation at the US-Mexico border. “America… should take a global responsibility.”

The Dalai Lama is keen to separate his relationship with the president, or lack of one, with that of other American politicians. He highlights the vice-president’s support for the Tibetan people and the backing he has enjoyed from politicians in both houses of Congress.

President Trump’s apparent snub is reflective of the wider pressure Beijing is able to exert on those who engage with the Dalai Lama.

In 2012, China temporarily froze relations with the UK after David Cameron met him and. last year, the Indian government cancelled its plans for a celebration to mark 60 years of his exile, for fear it would upset Beijing.

Cameron meets the Dalai Lama in 2008

The Dalai Lama’s world view is inherently global. When we discuss Brexit he tells me that he is “an admirer of the European Union” pointing out that global partnerships have been key in avoiding major conflicts.

But the world’s most famous refugee has some surprising views on immigration.

In a speech last year he said that refugees to the European Union should ultimately return home, adding that “Europe is for Europeans”, a statement he stood by when I challenged him on it.

“European countries should take these refugees and give them education and training, and the aim is return to their own land with certain skills,” he said.

The Dalai Lama believes the end game should be to rebuild the countries people have fled. But with some 70 million people displaced across the world according to the latest figures, what if people want to stay?

“A limited number is OK, but the whole of Europe [will] eventually become Muslim country, African country – impossible,” he said. A controversial viewpoint, and a reminder that while the Dalai Lama is a spiritual figurehead he is also a politician with views and opinions like everyone else.

Later in our conversation, I also challenged him on another remark he made in 2015, when he said if he was followed by a female Dalai Lama she would have to be attractive.

In another surprise, he reaffirmed his belief that beauty matters as much as brains. “If a female Dalai Lama comes, she should be more attractive,” he told me while laughing.

His message seemed at odds for a man who preaches a message of tolerance and inner confidence, but the Dalai Lama told me that in Buddhist literature both inner and outer beauty matter. He also said that equality was important and was keen to stress that he supported women’s rights and equal pay in the workplace.

As the interview drew to a close, I was struck by how unexpectedly frank our discussion had been, which reminded me of something the Dalai Lama had told me earlier in the day.

One advantage of not being able to return home to Tibet, he said, was that India is a free country where he can express himself openly.

The Dalai Lama’s message of unity is universal – but for a man famed for his compassion, he can also be controversial.