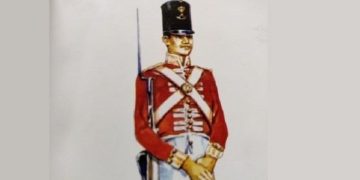 Ethnicity and religion in military recruitment in Sri Lanka

Ethnicity and religion in military recruitment in Sri Lanka Colombo, July 28 (South Asian Monitor): Ethnicity and religion have been defining factors in recruitment to the military in Ceylon/Sri Lanka from the Dutch and British era to the present day.

Between the 17th.century and till 1873, “Malays”, who were brought from Java and the Malay Peninsula by the Dutch and British rulers, dominated the armies of the Dutch and the British in the island. Post-1873, the Malays were replaced by British planters, Christian Burghers and Christian Tamils. After independence in 1948, Sinhalese Buddhists became the dominant group in the armed forces following the acquisition of power by the Sinhala-Buddhist majority.

B.A. Hussainmiya in his book Orang Regimen: The Malays of the Ceylon Rifle Regiment says that the Malays were brought to the island from the Dutch settlement in Batavia (Indonesia) to guard the settlements of the Dutch East India Company Vereenigde Oostindische Compagnieor VOC. The Malays were the single largest component of the VOC’s army.

Malay troops took part in all Dutch campaigns against the Portuguese in Galle (1640); Colombo (1655-56); and Jaffna (1658). In 1658, a Malay force under its own Malay commander, went along with Dutch commander Rycklof van Goens, to attack the Portuguese on the Malabar coast in Kerala. In 1680, Christopher Schweitzer wrote that the Malays were “very nimble and active in leaping and fencing” and that the Cingulayans (native Sinhalese) were “mightily afraid” of them.

During the Kandyan wars in which the Kandyans employed guerilla tactics, the Dutch cleverly threw the Malays into the front as they could take on the Kandyans in close combat with their kris knives and short swords. In 1795-96, when the British attacked the Dutch in the coastal districts, the Malays were the only ones to offer any resistance, Hussaimiya points out.

The British were so impressed, that when they took over the Maritime provinces from the Dutch in 1796, they made Malays a “permanent source of military manpower”. In 1802, Governor Frederic North sent Malays to fight against the Polygar rebels in Tamil Nadu. “They distinguished themselves by their active and indefatigable intrepidity,” North wrote to the Secretary of State in London.

North formed a “Malay Corps” with 1200 men and 22 European officers. The Corps was given the King’s Commission on 23/April/1801. On May 31, 1803, North presented the Corps its colors. At the function held in Gale Face Esplanade in Colombo, North said he had great pleasure “in presenting these Colors, not to a new Levy, but to a regiment whose past service is an earnest of future glory.”The Governor formed a Malay Boy’s Regiment to catch them young.

In a bid to attract more Malays, North offered Malays from the East Indies and the Malaya Peninsula good pay and free passage for the family. If a Malay was killed in battle, the government would look after his family, he said. In 1813, Governor Robert Brownrigg recruited Malays from Java with the help of Sir Stamford Raffles, the British Lt. Governor of Java.

The expanded Malay contingent helped the British defeat Sri Wickrama Rajasinghe, the last Sri Lankan king and capture him in 1815. Incidentally, Wickramarajasinghe recruited his bodyguards from the Malay community and not the Sinhalese, whose loyalty he suspected. In1818, the Malays helped the British suppress a serious rebellion in Uva province.

In 1833, the newly established police force majorly attracted the Malays partly because it was better paying. According to Hussainmiya, in 1833, nine of the ten police sergeants were Malays and 75% of the constables were Malay. According to Tuan M. Zameer Careem, every police station had become a “Malayu kampong” (Malay village).

When there were no wars to be fought in Sri Lanka Governor William Gregory disbanded the predominantly Malay Ceylon Rifle Regiment on August 15, 1873 and replaced it with a Volunteer Force of British planters and others, mainly Christian Tamils and Burghers because they were pro-British.

After independence in 1947, political patronage shifted wholesale to the majority Sinhalese Buddhists, affecting the composition of the army and the police. This led to an abortive coup on January 27, 1962. The effort of the top brass of the army, navy and the police to seize power reflected emerging religious, socio-cultural and political fissures in post-independence Sri Lanka, fissures which torment the country to this day.

In his paper entitled The Armed Services in a Period of Change: 1949-66 written for the Clingendael Institute of the Netherlands in 2001, the well-known historian K.M. de Silva said that till second half of the 1950s, the Sri Lankan army officer corps was three fifths Christian, Tamil and Burgher. Christians, both Sinhala and Tamil, who were one tenth of the country’s population, were over-represented by a factor of six, he says. But the Sinhala-Buddhists, who were 70% of the island’s population, constituted only two fifths of the officer corps.

But by 1960, following the Sinhala-Buddhist revolution triggered by SWRD Bandaranaike’s Sri Lanka Freedom Party (SLFP) and the coalition, Mahajana Eksath Peramuna (MEP), the officer corps had undergone a radical change in its communal complexion.”In just over 10 years after the establishment of the army (1949), the Sinhalese began to be over-represented in the officer corps as well,” Dr. de Silva noted.

The police too were affected. This was the reason why quite a chunk of the conspirators belonged to the police. In 1958, SWRD Bandaranaike overlooked three senior Christian claimants to the post of Inspector General of Police (IGP) and appointed a Buddhist. The message was clear: religious affiliation was an important consideration in appointments to politically sensitive posts such as that of IGP.

The armed forces were spared such changes till the early 1960s ie: till after Bandaranaike’s assassination and the succession of his widow Sirimavo Bandaranaike as Prime Minister in July 1960, Dr. de Silva pointed out.”Major shifts in the ethnic and religious composition of the police and army officer corps became evident almost as soon as she came to power,” he adds.

No wonder then that, all the 24 charged with conspiring to overthrow the lawfully constituted government were Christians, either Sinhala, Tamil or Burgher. In terms of ethnicity, there were 12 Sinhalese, six Tamils and six Burghers among them.

All of them were Anglophiles, who were also deeply disturbed by the change in the culture of Ceylon after 1956, when the “Sinhalisation” of the island began, and when the hoi polloi from the rural backyard stormed into the bastions of power in Colombo.