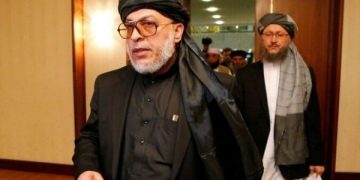 “Doors are open for talks with the US”, says Taliban’s Chief Negotiator Stanikzai

“Doors are open for talks with the US”, says Taliban’s Chief Negotiator Stanikzai Kabul, September 18 (BBC): The Taliban have told the BBC that their “doors are open” should US President Donald Trump want to resume peace talks in the future.

Chief negotiator Sher Mohammad Abbas Stanikzai insisted negotiation remained “the only way for peace in Afghanistan” during an exclusive interview.

Earlier this month, the two sides had appeared close to a deal to end the 18-year conflict.

Mr Trump had even invited senior Taliban leaders and Afghan President Ashraf Ghani to meet at Camp David on 8 September.

But a Taliban attack in the Afghan capital Kabul on 6 September, which killed a US soldier and 11 others, prompted Mr Trump to pull out, saying the group “probably don’t have the power to negotiate” if they were unable to agree to a ceasefire during talks.

Late on Tuesday, US Secretary of State Mike Pompeo issued a statement condemning recent Taliban attacks, saying the group “must begin to demonstrate a genuine commitment to peace”.

“They killed thousands of Talibans according to them,” he told the BBC’s chief international correspondent, Lyse Doucet. “But in the meantime, if one [US] soldier has been killed that doesn’t mean they should show that reaction because there is no ceasefire from both sides.”

“From our side, our doors are open for negotiations,” he added. “So we hope the other side also rethink their decision regarding the negotiation.”

What did the deal include?

The full and exact details are not known.

However, Zalmay Khalilzad, Washington’s top negotiator, revealed some details of the agreement “in principle” – including the US withdrawing 5,400 troops from Afghanistan within 20 weeks – during a television interview on 3 September.

In exchange for the troop withdrawal, the Taliban were willing to pledge that Afghanistan would never again be used as a base for foreign terrorism.

Mr Stanikzai told the BBC a ceasefire between the Taliban and foreign troops would have come into effect after the agreement was signed.

However, no such ceasefire would have existed between the Taliban and Afghan government forces, he said.

The Taliban – who are now in control of more territory than at any point before the 2001 US-led invasion – do not recognise the legitimacy of President Ashraf Ghani’s administration. They have refused to hold direct talks with the Afghan government until a US deal is agreed.

Mr Stanikzai said intra-Afghan talks would have started on 23 September, had a deal been reached, and would have included discussions about a wider ceasefire.

He also confirmed that the Taliban had approached both Russia and China for help in the peace negotiations.

“The only way they can see peace in Afghanistan is by negotiating with the Afghan government,” Dr Hamdullah Mohibt told the BBC.

He added: “Open discussions with our neighbours, those who are sponsoring and supporting the Taliban – that needs to be at the front of our discussions, not the back of it.”

What is the security situation in Afghanistan?

An average of 74 people were killed every day in the country in August, according to data collected by the BBC.

Without a deal, attacks are continuing unabated. Two suicide bombers on Tuesday left at least 48 people dead. Medical staff said children were among the casualties at an election rally targeted by one bomber. President Ghani had been due to speak ahead of elections later this month.

Both attacks were claimed by the Taliban.

However, when pressed on the high civilian death toll, Mr Stanikzai blamed “foreign forces”, citing United Nations statistics which show more civilians were killed by Afghan and US forces in the first half of 2019 than by insurgents.

He also defended the Taliban for taking shelter in civilian homes, and refused to be drawn on the many direct Taliban attacks which had killed ordinary men, women and children.