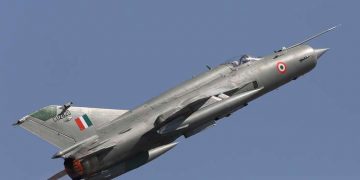 New York, March 4 (New York Times): An Indian air force pilot found himself in a dogfight last week with a warplane from the Pakistani air force, and ended up a prisoner behind enemy lines for a brief time.

The pilot made it home in one piece, but the plane, an aging Soviet-era MiG-21, was less lucky.

The aerial clash, the first by the South Asian rivals in nearly five decades, was a rare test for the Indian military. While the challenges faced by India’s armed forces are no secret, its loss of a plane last week to a country whose military is about half the size and receives a quarter of the funding was still telling.

If intense warfare broke out tomorrow, India could supply its troops with only 10 days of ammunition, according to government estimates. And 68 percent of the army’s equipment is so old, it is officially considered “vintage.”

“Our troops lack modern equipment, but they have to conduct 21st-century military operations,” said Gaurav Gogoi, a lawmaker and member of the Parliamentary Standing Committee on Defense.

US officials tasked with strengthening the alliance talk about their mission with frustration: a swollen bureaucracy makes arms sales and joint training exercises cumbersome; Indian forces are vastly underfunded; and the country’s navy, army and air force tend to compete rather than work together.

The United States is determined to make the country a key ally to hedge against China’s growing regional ambition.

The US military began prioritising its alliance with India as its close relationship with Pakistan soured over the last two decades. US officials are concerned that Pakistan is not doing enough to fight terrorism, a charge the country denies.

In just a decade, US arms sales to India have gone from nearly zero to $15 billion. But Pakistan can still draw on a powerful US-supplied arsenal.

Indian officials say Pakistan used one of its F-16 fighter jets to down its MiG-21 last week. Islamabad rejected the claim, but on Sunday the US Embassy in Islamabad said the United States was looking into the report.