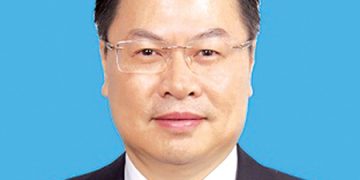 Colombo, April 25 (newsin.asia): The Chinese Ambassador in Sri Lanka, Cheng Xueyuan, has said that the comprehensive development of the Hambantota Port is proceeding smoothly and Sri Lanka has added a new “important port” to the outside world.

In a statement to the media, Cheng said that the construction of the Colombo Port City is steadily progressing “day by day” and many overseas investors have shown “strong” interest in the up and coming city.

The Economic Corridors of Colombo-Hambantota, Colombo-Kandy are also set to flourish.

“With all these collaborative efforts, economic development of the island nation is expected to embark on the fast track,” the envoy said.

“Both China and Sri Lanka have benefited from WTO and the global trade rules, which have contributed to China’s reform and opening up, and also made Sri Lanka a jewel in the Indian Ocean,” Cheng said.

“Sri Lanka, with its unique geographical location, has always been actively participating in economic globalization,” he added.

Under the guidance of the important consensus reached by the leaders of our two countries, the framework of the Belt and Road Initiative, and the tide of economic globalization, Sino-Sri Lanka pragmatic cooperation has developed rapidly, Cheng said.

On future sino-Lankan ties, the envoy said: “As long as it adheres to trade liberalization and economic globalization, Sri Lanka’s great dream of becoming an important economic center in Asia would surely be realized in coming years.”

“China is willing to work together with all countries, including Sri Lanka, to safeguard the multilateral trading system, promote further development of economic globalization, build a new form of international relations and a community of shared destiny, so as to bring greater welfare and brighter future to the people of the world,” the envoy pledged.

“We live at a time with an overwhelming trend toward peace and cooperation, openness and connectivity, reform and innovation. Reliance on cold-war and zero-sum mentality looks even more out of place in such times.”

“Openness leads to progress while seclusion leaves one behind. With the future in mind, we should stay committed to build an open global economy, uphold the multilateral trading system, and jointly make economic globalization more open,

At the end of the speech, President Xi reaffirmed that China would advance reform and opening-up, and announced measures for further measures in that direction, including broadening market access, improving investment environment, strengthening intellectual property rights protection, and expanding imports from foreign countries.

Since March this year, Trump administration in the US has unilaterally adopted a number of trade protection measures, which might trigger a global trade war that would affect the whole world. These dangerous measures of unilateralism and protectionism are very likely to seriously damage the global economy that is undergoing a difficult recovery, impacting on everyone, in one way or the other.

“From a deeper perspective, how countries around the world respond to these challenges is a matter of principle: whether or not we will follow international trade rules, defend the multilateral commercial system, and promote economic globalization?”

“We once again stand at the crossroads of human history, and have a major choice to make between openness and isolation, between progress and retreat”:

“It is gratifying to note that more and more countries, including Europe, Japan, India, and Singapore etc., choose to support trade liberalization and economic globalization in various ways.”

“It fully demonstrates that economic globalization is still the trend in the world, and the isolated island of protectionism will eventually be abandoned by this wave,” the envoy said.